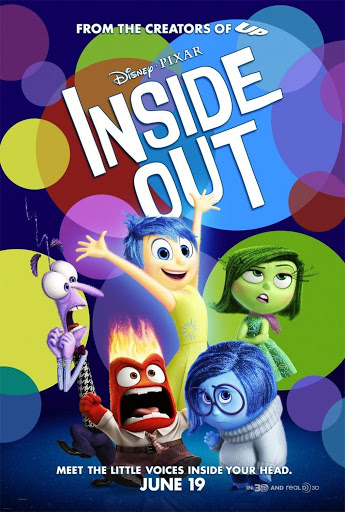 We all enjoy the exuberant accomplishments by Pixar for creating more than dozen animation feature films during the last two decades. Even so, you are surely to be blown away by Pixar's latest triumphantly entertaining "Inside Out" (USA 2015 | 94 min.). This exquisitely crafted 3D film, co-directed by Pete Docter and Ronaldo Del Carmen, not only charms us with dazzling visual and an intelligent and original story, but also provokes us to reflect on how our emotions and memories make us for who we are. It well deserves the rapturous reception including a 10-minute standing ovation when it was premiered at this year's Cannes Film Festival, and it seems a shoo-in to win the best feature animation for the upcoming Oscar.

It all begins with the birth of a girl named Riley. Before even she can speak, we meet her five emotions—Joy (voice by Amy Poehler) is the cheerful and restless leader who appears to be in control most of the time; Sadness (Phyllis Smith) is totally on the opposite and often to be gloomy and low energy; Anger (Lewis Black, who else?) blasts off whenever it senses injustice and unfairness; Fear (Bill Hader) is constantly on guard to keep Riley away from danger; and Disgust (Mindy Kaling) makes the judgment about what's acceptable both physically and socially for Riley.

These emotions are busy at work day and night to process Riley's memories. Each piece of her memory is stored in a ball. The important pieces are transferred to the permanent storage as core memory while others are discarded to a memory waste land. These core memory balls further power islands, such as Family Island and Friendship Island, that constitute Riley's personality. In order to ensure that Riley's memory is full of happiness, Joy makes her best effort to prevent Sadness putting a blue shadow to a piece of her core memory.

That seems to be going well, until Riley (Kaitlyn Dias) is 11-year-old. She leaves her childhood friend behind and moves to San Francisco with mom (Diane Lane) and dad (Kyle MacLachlan). It's a completely new up-side-down world and her emotions go on an extraordinary journey along with her growing up. 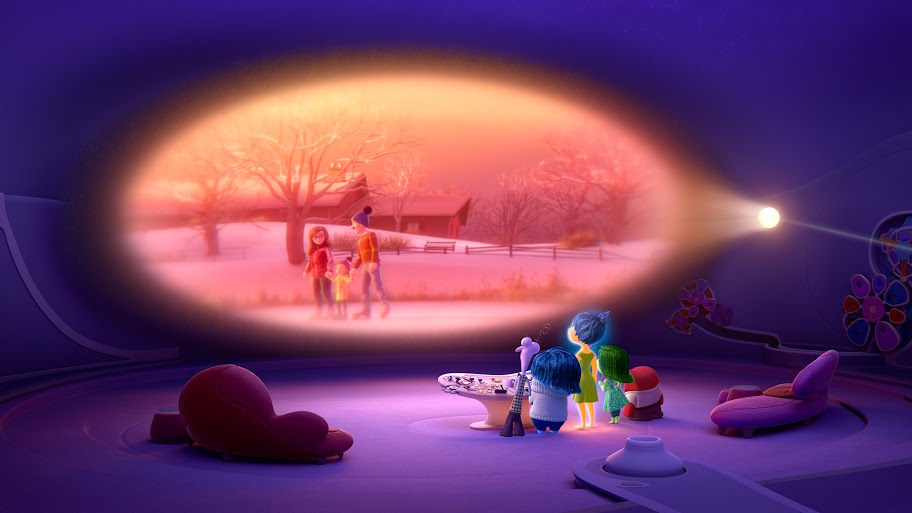 This perfectly executed film is a masterpiece, period. It brilliantly tells a complex story that both children and adults can comprehend, but at different levels and from different perspective. When it comes to visual, we expect nothing short of excellence and astonishment from a Pixar film, yet this film's impeccable details and stunning images raise the bar to a new high. On top of that, Pete Docter marvelously transforms abstract concepts into 3D objects that are even within the reach of a child. Through the genius creation of these emotion characters, the film amusingly and splendidly illustrates how Riley's personality evolves when she grows up, and what her happiness is made of, and even what it looks like in her mind when she feels empty and down.

If you are familiar with the city of San Francisco, you will appreciate the film even more due to how the film pays attention to some unique characters of the city that are in the only-in-San-Francisco category. When Riley walks on a narrow and steep street, even the curb is painted with red color (which means no parking)! Everyone is going to laugh when broccoli becomes the only topping on a slice of pizza. Will Riley eventually get a nose ring? Disgust may evolves its taste as well.

With much delight, the film shares its wisdom with us by get into Riley's head. Life isn't always a joyride. Embracing our true emotions makes our lives richer, and cherishing our memories shapes who we are.

Comments:
Saying Pixar's ‪Inside Out‬ the best Disney Pixar or Best Picture of the Year is truly an overstatement; but it truly is a marvel and never have I witnessed an audience cried or laughed so hard as much as this film. Inside Out had everything, from great script to perfect casting. The film takes you on a journey from inside a young girl's mind which are controlled by five emotions as she deals with moving away from what she has known and grew up. The sheer details and imagery is breathtaking. Pete Docter is a brilliant human being and really knows how we all feel and go through in life.

Watch Inside Out Movie Online Free