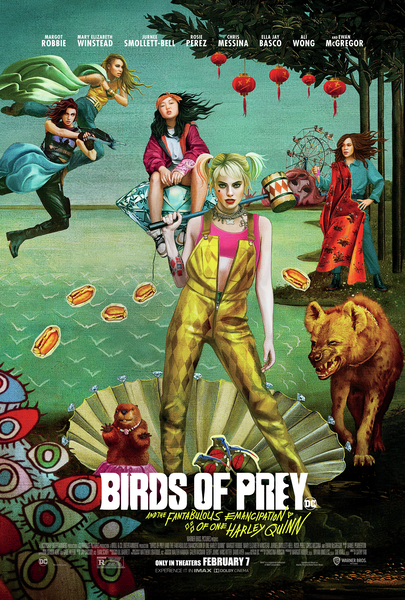 As if to support the point made by the legendary director Martin Scorsese about superhero movies, the director Cathy Yan's latest DC Comics adaptation "Birds of Prey (And the Fantabulous Emancipation of One Harley Quinn)" (USA 2020 | 109 min.) is a noisy over-the-top farce. Watching this film is more like flipping through a comic book written for a teenage girl. The film is written and directed by women, has an all-female leading cast, and has a plot centered around female characters. But if the film is meant to proclaim women's empowerment, it misfires and adds another repetitive addition to the crowded comic book adaptations.

Before the poker-faced Harley Quinn (Margot Robbie) even appears on the screen, her rapid-fired voice-over already takes over the house explaining her psychologist background and her recent break up with Joker, accompanied by animation. She needs to release her grievance by going out in Gotham City and making some destruction.

Other characters are introduced one by one with their names and grievances written across the screen. They include a cop Renee Montoya (Rosie Perez), a revenger Helena Bertinelli (Mary Elizabeth Winstead), a night club singer Dinah Lance (Jurnee Smollett-Bell), a pick-pocket Cassandra Cain (Ella Jay Basco), and a nightclub owner Roman Sionis (Ewan McGregor). After Cassandra steals a diamond from Roman, these characters run around the city, even raid the police station, to get the diamond back. In almost every scene, women kick asses and defeat every male villain in their way, no matter how mean these men look and how big they appear. Speaking of girl-power.

Despite being hailed as the first Asian woman to direct a major studio-backed superhero film, the director Cathy Yan ((阎羽茜) should have made a better choice for her second feature to be a real cinema project. Her award-winning first feature "Dead Pigs" (海上浮城 | China 2018) is a terrific film that crafts a few mesmerizing and lovely characters and tells an engrossing story. But that vision and style in her first feature is nowhere to be found in this loud and ridiculous superhero installment.

Even serving as an action flick, the fighting sequences in the film are repetitive and last too long. They kick, flip, then kick and flip, and on and on. I am not sure why this is labeled as a superhero movie, because besides winning every fight, there is nothing super about these women. But they are surely all angry as hell. Harley's voice-over hardly stops throughout the film and you just want her to shut up. Who cares if she has a Ph.D. in psychology, she rarely has anything meaningful to say anyway.

Judging from Cathy Yan's two features films, you cannot help but to agree with Martin Scorsese's opinion wholeheartedly. Let's hope Cathy Yan will show her immense talent in her next feature like she did in her first feature, by making cinema instead of comic books.