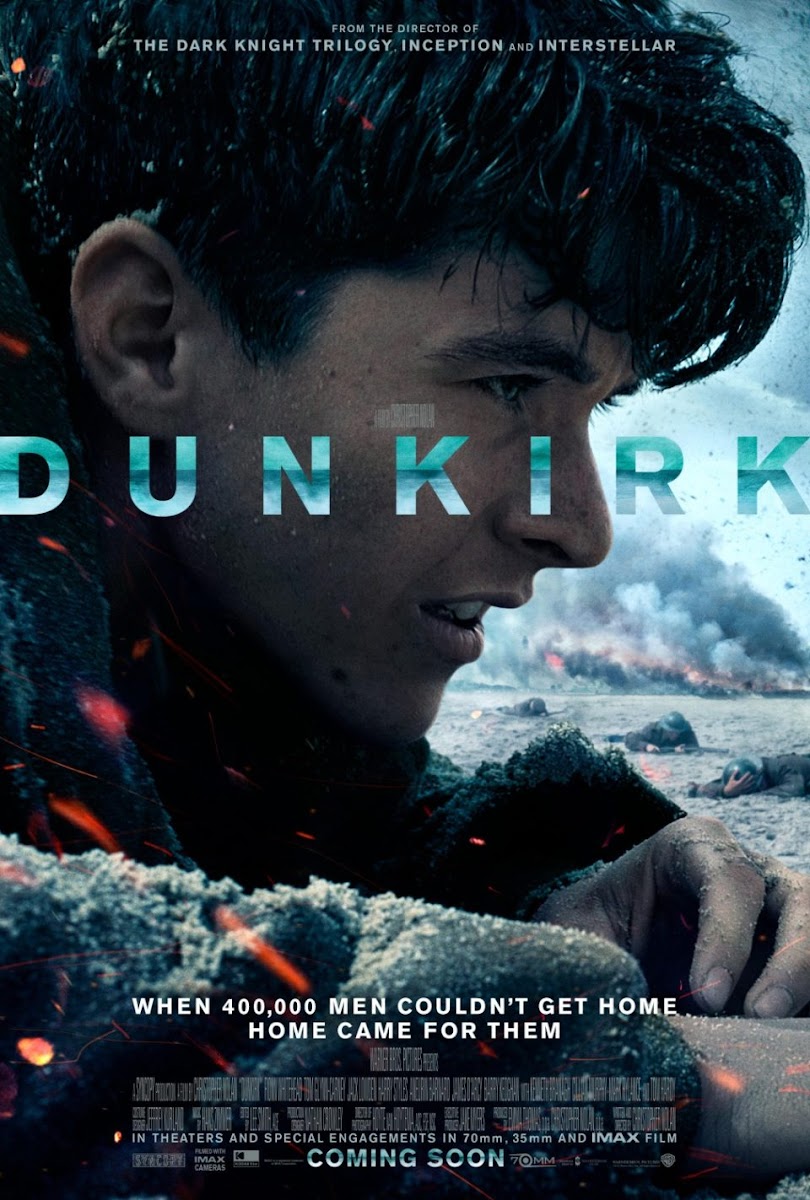 No one seems to be able to forget how brutal the bloody Normandy Beach Operation was during World War II in Steven Spielberg's "Saving Private Ryan" (USA 1998), and everyone knows the name Normandy and its significance to the victory in fighting the Nazis. But perhaps few have heard about Dunkirk, a beach town in France that also bears its significance during World War II for the Allied forces. Thanks to the blockbuster director Christopher Nolan's intense "Dunkirk" (Netherlands/UK/France/USA 2017 | 106 min.), the name Dunkirk might soon become as familiar as Normandy. This triumphant film brings you right inside a war zone like never before. It easily becomes one of the greatest war movies ever made. It also firmly establishes Christopher Nolan's status as a singular filmmaker in addition to being a money maker for the Hollywood studios, especially when the film marches into the fall Oscar season with a full chest of cash from the box office.

Christopher Nolan is well-known for his nonlinear storytelling, as demonstrated in his time and mind bending "Interstellar" (USA/UK/Canada/Iceland 2014). In this film, he continues that style but tends to be much more conventional. He masterfully crafts an immersive war story by simultaneously yet seamlessly focusing on the combats on land, at sea, as well as in the air. The film breathlessly displays the battle ground up-close as if you were soaked in the hellish blood-bath witnessing the horror.

During May-June of 1940, almost 400,000 British, French, Belgian, and Canadian troops were cornered by the German army to the Dunkirk beach, only 26 miles across the English Channel from the UK. The water was too shallow for the British war-ships to reach the shore in order to rescue the soldiers back to the UK. Meanwhile, the troops were exposed to the constant German bombing from the air while waiting for their evacuation. This film reenacts the survival struggles from the perspective of these soldiers facing death every second.

On land, the story is centered on a frightened British lad Tommy (Fionn Whitehead) who desperately wants to find a way to get on a ship, along with tens of thousands of troops queuing up on the beach waiting to evacuate, commanded by naval Commander Bolton (Kenneth Branagh) and Col. Winnant (James D'Arcy) from the army. In the air, two Royal Air Force pilots Collins (Jack Lowden) and Farrier (Tom Hardy) courageously disrupt German bombers that have been quite successful in sinking British ships. And at sea, a British civilian Captain Dawson (Mark Rylance) sails out to the sea toward Dunkirk with his teen-aged son Peter (Tom Glynn-Carney) and Peter's friend George (Barry Keoghan). Together with thousands of other heroic civilians, they roll out their fishing boats or yachts and risk their lives to bring the soldiers back to the UK.

The British only hoped to bring back 30,000 soldiers back alive. Instead, the majority of the troops were miraculously evacuated and the miracle had a lasting impact on the outcome of World War II.

Unlike other war movies, this fast-paced World War II thriller contains no inspiring speeches, complex politics, tear-jerking sentiment, or even a single image of the enemy. There is no time for any of those. The director Christopher Nolan terrifically assembles every top-notch creative force together and delivers an exhilarating experience about what it's like to be caught in the middle of a war. He superbly composes vivid visuals to tell his story, accompanied by a soundtrack which is so effective that it is often indistinguishable from the horrifying sounds of war. When bombs stop exploding, the ticking watch sound reminds you that danger can still appear any second. You never get a break from the tension throughout the film. Christopher Nolan completely takes control of your attention with his cinematic tricks.

Very few lines are spoken by the characters. Even when they do have time to speak, the heavy accent and the surrounding noise make them hard to understand. But that's exactly what it would be like in such a chaotic setting, and you won't have time to figure out what has been said. Every second is a battle between life and death.

You will be glad that you're just having a realistic war experience in a movie theater lasting only less than two hours, rather than in reality.