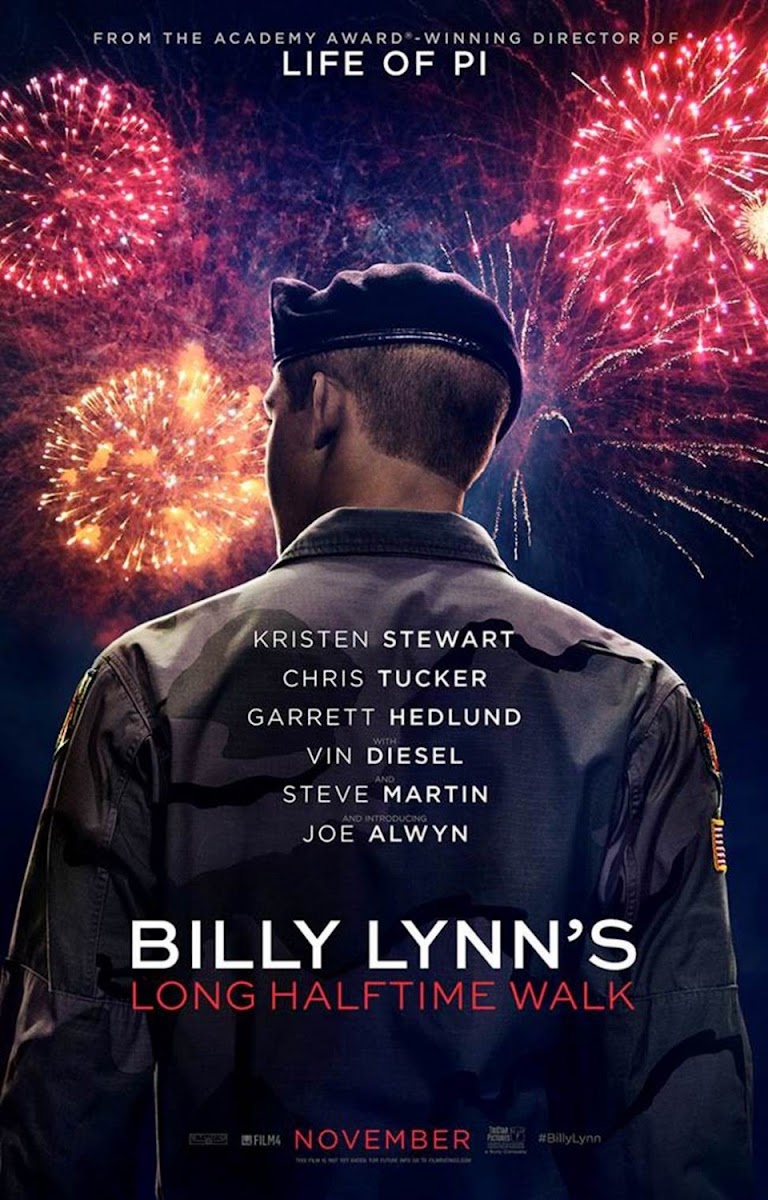 Acclaimed Oscar-winning director Ang Lee is both bold and revolutionary when he decided to make a drama called "Billy Lynn's Long Halftime Walk" (UK/China/USA 2016 | 110 min.). For the first time in motion picture history, the film is in 4K resolution and 3D and projected at the speed of 120 frames-per-second (vs the usual 24 frames-per-second).

Based on a novel by Ben Fountain, the film is about a soldier's extraordinary experience in an Iraq war zone and how he deals with the reactions from folks back home. That story sounds unlikely to be the subject of such a technical experiment. Yet, the director wants to give you a virtual-reality experience by making images look intensely real, and allow you to feel the characters as if they were right next to you.

Alas, I saw the film in old-fashioned regular resolution, and most of you will probably also see the film without this much-hyped technical advance, because only two theaters in the US (in NYC and LA) are equipped to show the film as the director intended for you to see it. Putting this much-talked about aspect aside, is this drama about homecoming still worth seeing? Absolutely! This is an emotionally charged absorbing film that will help you truly experience the profound impact the war has upon the soldiers.

Despite all the patriotic rhetoric portrayed in motion pictures and literature, that was not the reason that 19-year-old Specialist Billy Lynn (Joe Alwyn) joined the army and got deployed to Iraq. He joined the army as part of the plea agreement after he wrecked the car of his sister Kathryn's (Kristen Stewart) ex-boyfriend.

Once in the army, he is transformed into a fighter and forms a solid bond with his fellow soldiers, an eight-men unit called Bravo Squad, led by Shroom (Vin Diesel) and Sergeant David Dime (Garrett Hedlund). During a fierce fight, Billy risks his own life to help Shroom and kills a Taliban fighter. He is hailed as a hero and is awarded a Silver Star. Now Hollywood wants to turn his story into a movie.

During Thanksgiving holiday, Billy and his Bravo Squad return home for a victory tour and are invited to appear in Beyoncé's performance during the halftime show at the Dallas Cowboy's home game. Meanwhile, Hollywood producer Albert Ratner (Chris Tucker) tries to get the Cowboy's owner Norm Oglesby (Steve Martin) to finance a film based on Billy's story.

Still suffering from PTSD, Billy is dazzled and confused by all the fame and pressure, and has to make a choice between his commitment to his fellow soldiers and the plea from his anti-war sister who asks him to stay. 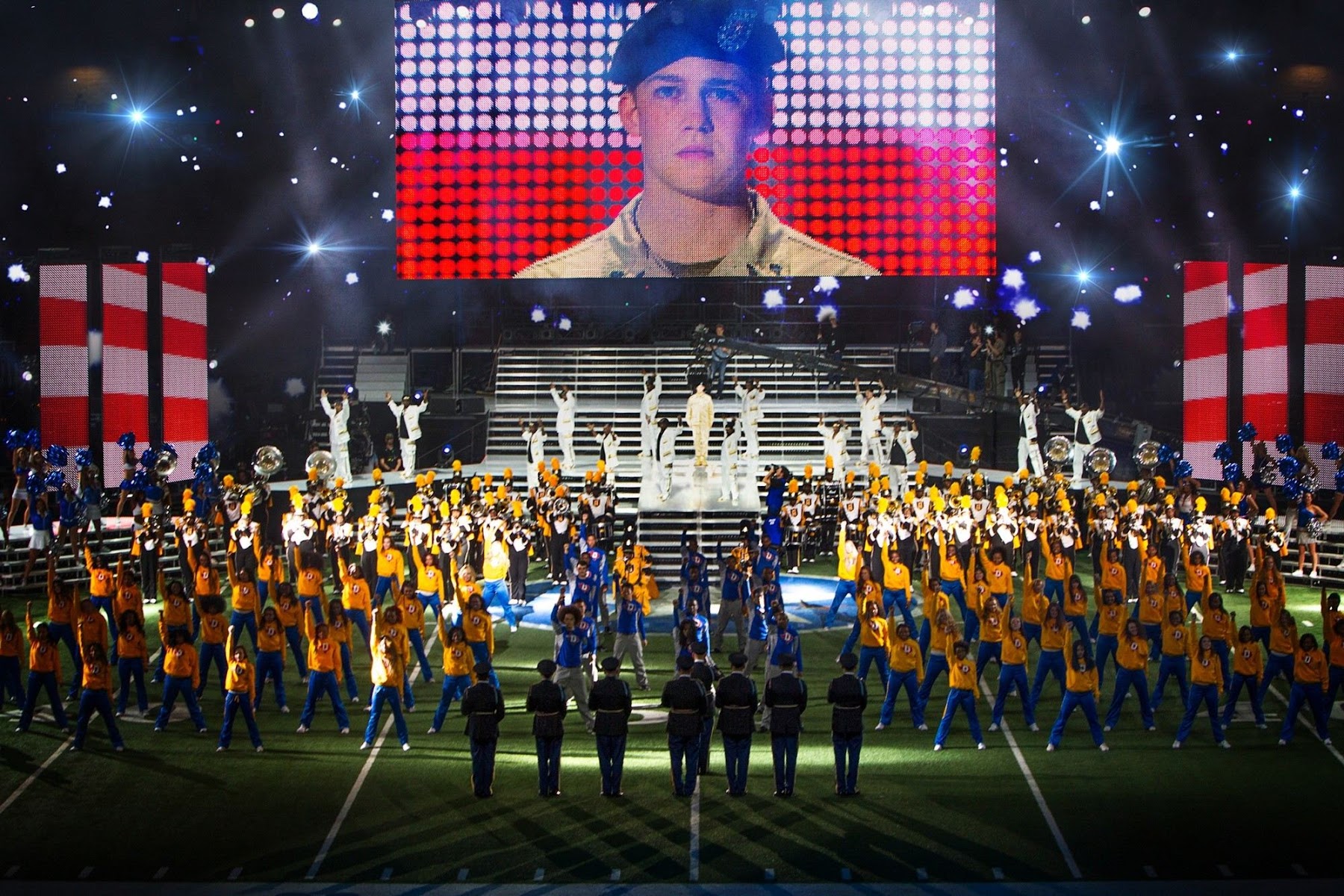 The director Ang Lee is a superb cinematic storyteller. Even without the ultra-sharp visual he envisioned for this film, he terrifically puts the characters' internal conflicts on vivid visual display. The often teary-eyed Joe Alwyn fantastically exhibits the vulnerability and sensitivity underneath the military uniform. He superbly portrays the tremendous burden, both physically and mentally, after returning home from war. Regardless of whether they go to war willingly or opportunistically, those who do will never be the same, and some of them lose themselves forever in the fog of war even when their bodies are still intact. Sometimes the trauma is within and is not always visible. Through the brutality of the war, Billy loses his innocence but also ironically finds his destiny.

The line between ideologies becomes blurred, and the patriotic slogans fade to the background, and the perspective about war evolves. Ang Lee eloquently decodes that complexity about war by telling Billy's story with sensitivity, precision, compassion, and humor. In the end, we find ourselves being torn about what Billy should do and overwhelmed by whatever decision he makes.

Forget about the super-high definition at the speed of 120 frame-per-second. Even with the plain old 24-frame-per-second projection, you will be deeply touched by Billy's every step during his long walk before, during, and after the halftime show.