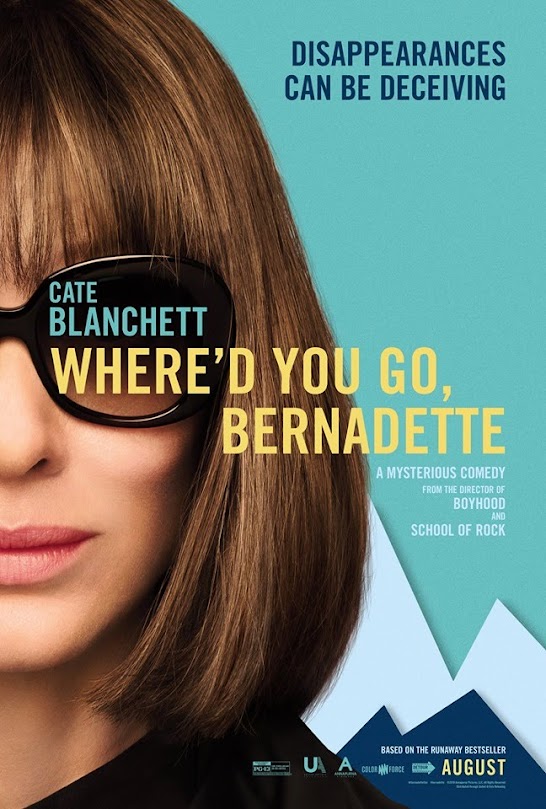 As the creator of brilliant films such as the Before Trilogy and "Boyhood" (2014), the writer-director Richard Linklater has told many compelling, original, and mesmerizing stories in his previous films. In comparison, his latest meager drama "Where'd You Go, Bernadette" (USA 2019 | 120 min.) looks like an odd outlier. Based on a novel by Maria Semple, the film tells the struggle and rediscovery of a self-exiled architect. It's hard to believe that the film is actually made by Richard Linklater, because the conventional and predictable story flows like a made-for-TV movie that is only good for killing some time during a long flight on a tiny screen.

Used to be a rising star, architect Bernadette Fox (Cate Blanchett) now lives in a big mansion in disrepair in Seattle with his husband Elgie (Billy Crudup) and their 15-year-old daughter Bee (Emma Nelson). You don't need psychotherapy training to notice her issues. She constantly dictates to her phone in order to send super long text messages to her online assistance (wait, why doesn't she send voice messages instead?); she compulsively shops online; she gets nervous around people; she hoards prescription drugs; she despises her neighbor Audrey (Kristen Wiig); and she is jealous of Elgie's assistance Soo-Lin (Zoe Chao). In other words, She is a mess.

Bee persuades her parents to go on a family trip to Antarctica, but Bernadette is anxious about it because she dreads being surrounded by hundreds of people in a clustered environment. Slowly, Elgie begins to realize that his work at Microsoft has been keeping him away from his family, especially from helping Bernadette to deal with her issues.

Elgie decides to help Bernadette by bringing in a psychologist, but soon Bernadette disappears from the bathroom window. Elgie and Bee go on a quest to find Bernadette who is actually on a journey of self-discovery, without telling her family.

The unconvincing humdrum story drags through the entire movie one cliché after another. Bernadette is a character that is hard for us to sympathize with, because the film never successfully elaborates the reasons for her behavior. Despite the capable Cate Blanchett who put on her best effort playing the unappreciated architect, it's quite clear on screen that she doesn't believe in her character either.

Almost all the characters in the film love to talk. They indeed talk a lot and there is hardly a quiet moment during the entire film. But no matter how much they talk, even during the psychotherapy sessions, they cannot plausibly explain themselves. Sometimes, the film just quits trying. For example, the reconciliation between Bernadette and her neighbor Audrey after their falling-out is simply preposterous. It might be a typical scene on TV, but it's hard to believe it's under the direction of Richard Linklater.

So, where'd Bernadette go? The movie didn't give us a reason to care.