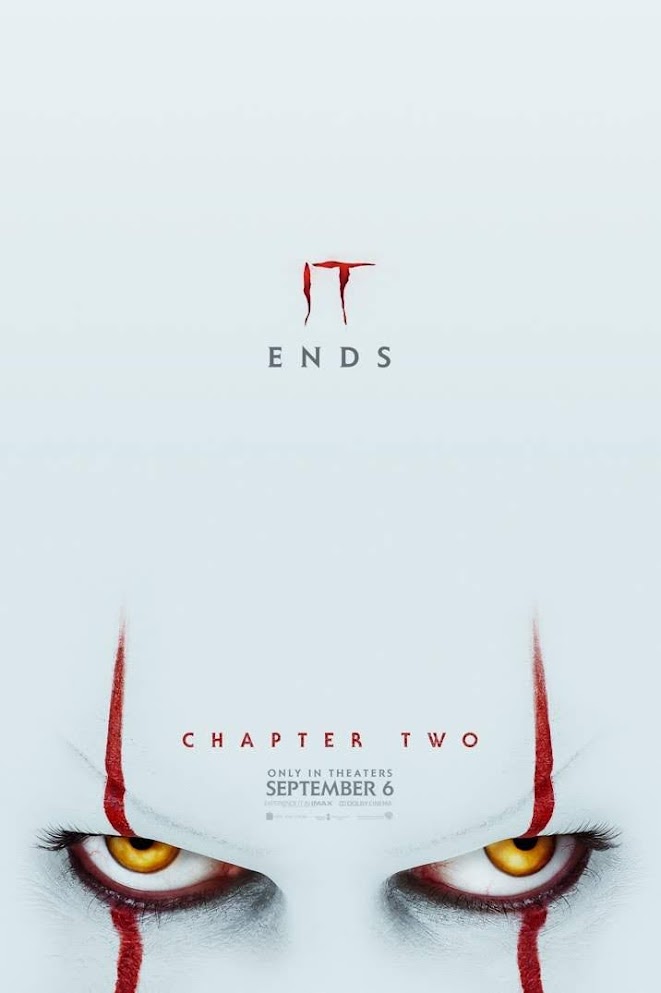 If you come to a movie based on a Stephen King novel, you expect that you will be scared, or even terrified. Will that expectation be satisfied by the director Andy Muschietti's "It Chapter Two" (USA 2019 | 169 min.)? Probably not. The film's horror scenes are more gross and icky than scary, and not funny enough despite a few amusing moments. Although the film is a sequel of the director's "It" (2017) and is set 27 years later, it uses enough flashbacks to reference the previous film's story so that you should be able to follow the plot even if you have forgotten or never seen the previous chapter.

In the first movie "It," seven outcast teenagers in Derry, Maine band together as the "Losers Club" to fend off a monstrous clown Pennywise (Bill Skarsgård) in 1989. They take an oath to reunite again if they need to defend themselves against Pennywise in the future.

The calling comes upon them in 2016 when a horrific homophobic attack takes place at a carnival fair and Pennywise resurfaces. Mike (Isaiah Mustafa), who is the only one still staying in Derry after 27 years, begins to summon each of the members of the Losers Club back to town.

Now around their 40s, they have not been in contact with each other for 27 years. Yet, as soon as they get the call from Mike, they keep their promises and come back to Derry, except Stanley (Andy Bean) who is the only one that fails to return. Those who returned, gathering at a Chinese restaurant, are a Hollywood writer Bill (James McAvoy), a fast-talking comedian Richie (Bill Hader), a domestic violence survivor Beverley (Jessica Chastain), a no longer chubby Ben (Jay Ryan), and a risk analyst Eddie (James Ransone).

The reunion isn't a fun time for catching-up or a nostalgic remembrance of their friendship in Chapter One. They must fight back the attacks from the evil clown Pennywise and many other creatures in Derry where people don't really die.

Like most horror films which tell Stephen King's stories, jump-scare tactics is a given like ketchup at a burger joint. But its frequent usage in this film is a bit too excessive. After a few times, the effect of a monstrous figure's sudden appearance on screen begins to wear off, as if you are revisiting a haunted house in which you already know where something will jump out to you.

It's disappointing that the director Andy Muschietti seems to run out of tricks to use to scare us. So, he starts to take another route by creating a grisly environment that often involves sticky yucky looking fluid to gross us out.

He also failed to establish the bond among these adult characters besides flashing back to their younger days. If they still cherish their old time, how come they haven't had any contact with each other in the past 27 years, and if they are no longer close, home come they suddenly risk their lives in front of the monsters for one another? The repetitive nightmares drag on for almost three hours while we can all predict how the story is going to end.

Like all the characters in the film, you will be glad when it's finally over.