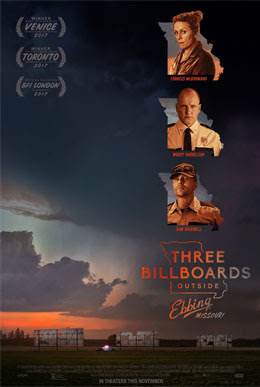 The power of advertising can never be underestimated, just take a look at how companies like Google and Facebook generate revenue, and how the 2016 election was meddled by the Russians. Even in Ebbing, Missouri—a fictional replica of an average small town in America— portrayed in writer-director Martin McDonagh's third feature "Three Billboards Outside Ebbing, Missouri" (USA/UK 2017 | 115 min.)—an enraged grieving mother knows how to effectively use advertising power. The mother, finely played by Academy Award-winner Frances McDormand, surely illustrates how her billboard messages can turn a sleepy town upside down.

Despite being slow and quiet in the middle of nowhere, Ebbing is not immune from crime and injustice. Eight months ago, Mildred Hayes's (Frances McDormand) teenager daughter was raped and murdered. As the case gets cold, the angry Mildred decides to take the matter into her own hands by provoking the town's Police Chief Bill Willoughby (Woody Harrelson). She walks in an advertising company, conveniently sitting across from the police department, and rents three billboards along a country road. In all capital letters on bright red background, she puts up messages asking the Police Chief why there is still no arrest for her daughter's murder.

That unorthodox move immediately gets Bill's attention, alienates other folks in town, and infuriates the racist cop Jason Dixon (Sam Rockwell). But just when you think this movie may be about a war between Mildred and the Police Chief, it quickly turns and assures you it is anything but. The movie constantly twists and turns around this murder case and gradually evolves the relationship among its characters.

The film also isn't about unveiling the murderer as in "Murder on the Orient Express," but about how these characters react to each other as a consequence of these three giant billboards inquiring about the murder case. Everyone seems to have flaws, but no one is as bad as the others might have projected them to be. Mildred's billboards force them to change and come together. 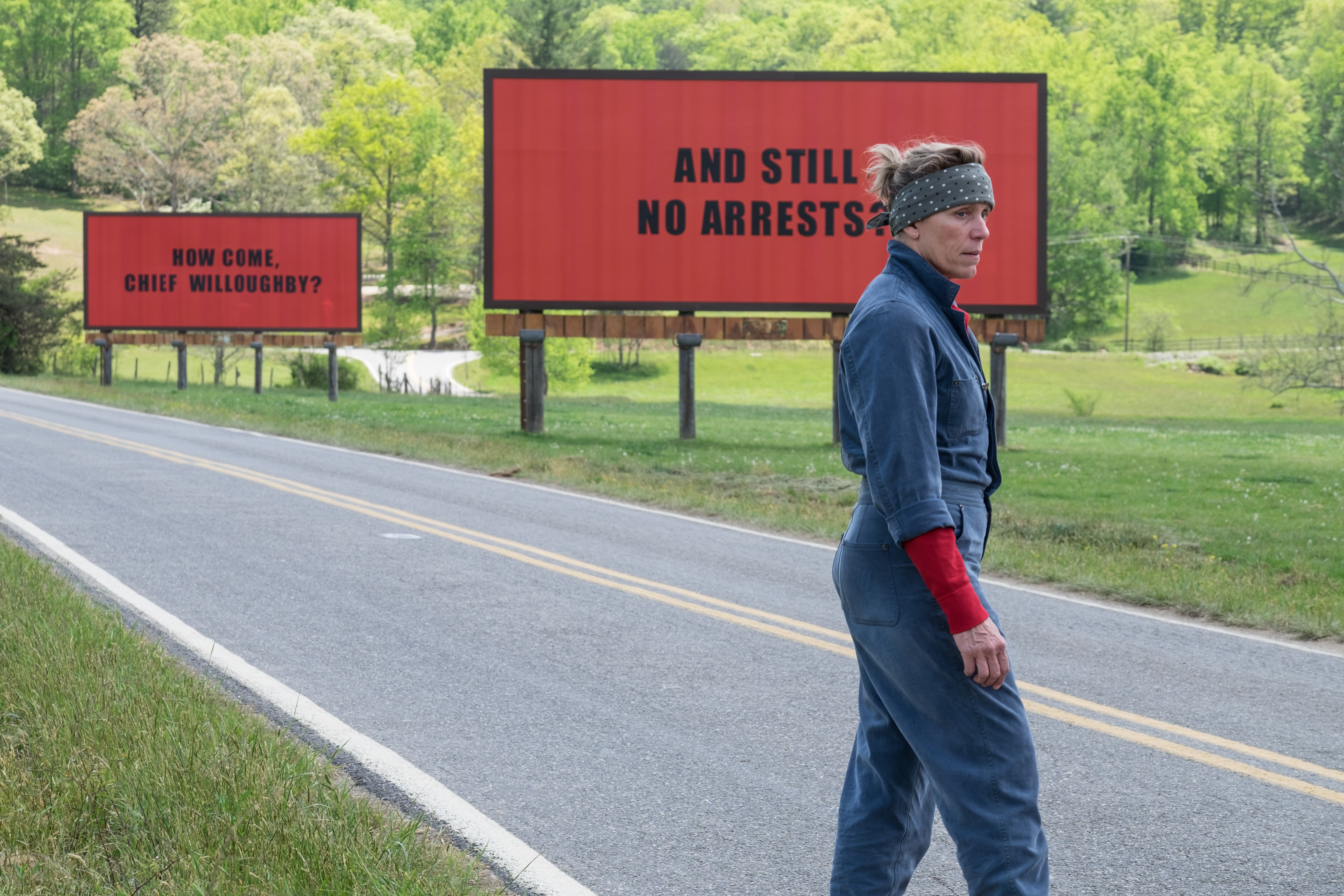 Coming from his background as a playwriter, the writer-director Martin McDonagh is no stranger to composing colorful and sharp dialogues. His entertaining feature directorial debut "In Bruges" (UK/Belgium 2008) is full of amusing and mesmerizing lines. That quality is fully on display in this film. However, he might have gone overboard given the subject matter of this film. The film is about a grieving mother, and many comical lines seem to be out of sync with the undertone in the air. You can't help but laugh with his smart writing, but then you feel awkward and a little guilty for giggling.

The best aspect of the film is its character development and the terrific ensemble performance. We not only get to know these characters, but we gradually understand them and are intrigued by them. They might not be our everyday encounters, but they are certainly rooted in a typical American small town.

Martin McDonagh perfectly crafts his foul-mouthed no-nonsense protagonist, precisely delivered by Frances McDormand. Mildred is by no means a perfect mother, and her actions may just be the result of feeling guilty and a desire to seek redemption. But no one can question Mildred's stubbornness and even recklessness. The film provides a great platform for Frances McDormand to showcase her exceptional talent as a character actress.

Another terrifically written character is the outrageously bad cop Jason Dixon, fantastically played by Sam Rockwell who deserves an Oscar nomination for best supporting actor. Jason is ignorant, brutal, racist, and not very intelligent. But that's how he presents himself on the surface, and you may be surprised when you stop brushing him aside as a scumbag cop and look deeper inside his soul.

The film took the top-award at this year's Toronto International Film Festival, and surely it will collect more when it marches towards the red carpets of this award season—of course with some help from advertising campaigns.