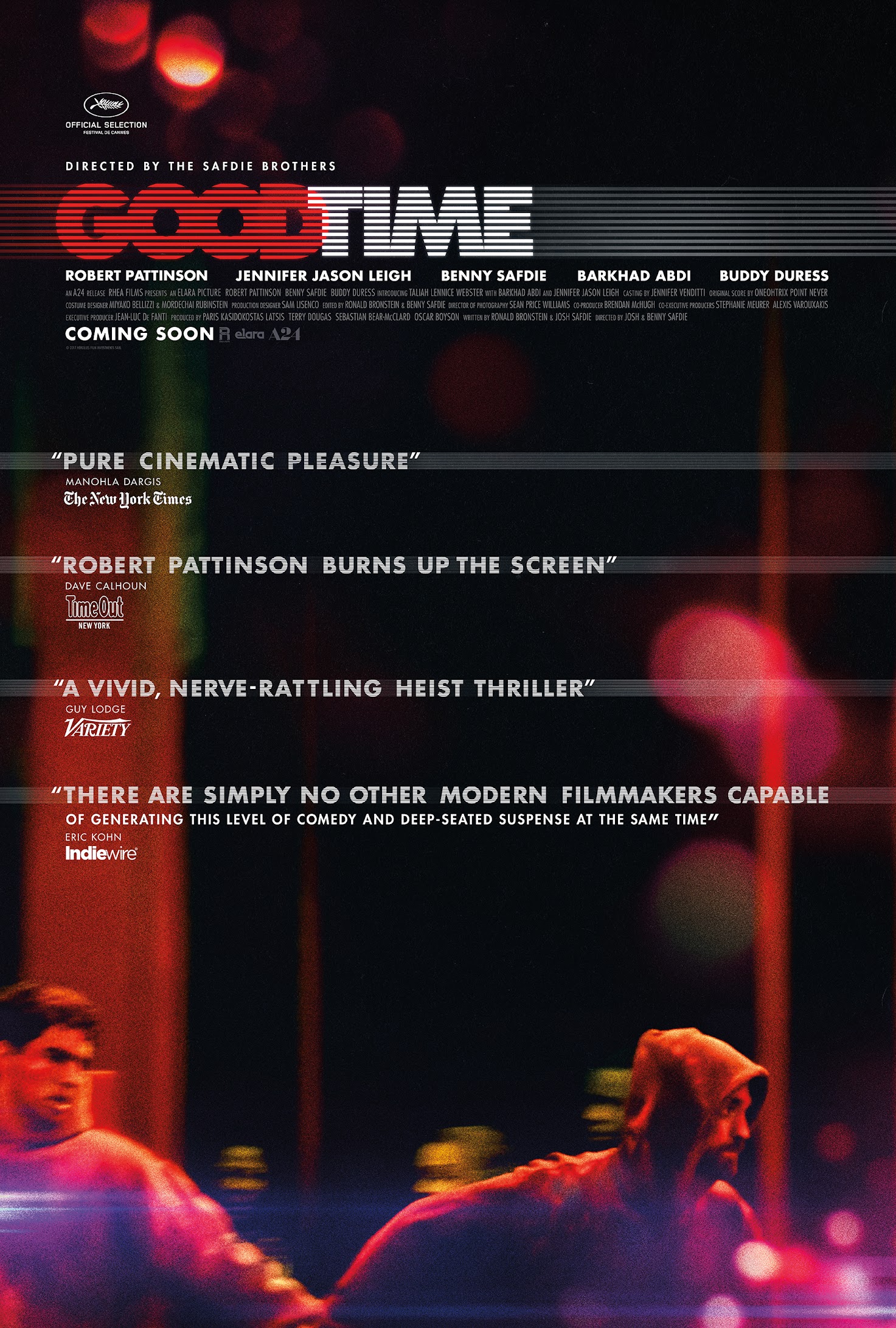 I often feel apathetic toward drug addicts and their stories in films. However, the new film from the writer-director brothers Josh and Benny Safdie, "Good Time" (USA 2017 | 100 min.), proves to be a rare exception which intensely captured my attention. It's a wild ride that is fueled not by drugs or greed, but by brotherly love. In the end, you may question the film's protagonist's judgment, but you won't have any doubts about his dedication to his brother.

Nick (Benny Safdie) is a hearing impaired and intellectuality challenged young man. When he is getting evaluated by a psychologist (Peter Verby), his protective brother Connie (Robert Pattinson) storms in and drags him out. Where to? To rob a bank!

We are not told why they need to rob a bank besides the fact that they are obviously poor. But during the process, it appears that perhaps bank robbery is the only act Connie can come up with in order to let Nick participate and feel validated about his normality and ability. Surprisingly, they are able to pull the gig off without a glitch, until the glitch kicks in. The two amateur bank robbers begin to run on foot and eventually Nick ends up in jail. Now Connie's mission is try to do anything imaginable to get his brother out while the police's dragnet is closing in on him.

During the eventful night, a few colorful and terrifically acted characters cross paths with Connie, including his intoxicated girlfriend Corey (Jennifer Jason Leigh), a drug head teen-aged girl Crystal (Taliah Webster), and a newly paroled drunk Ray (Buddy Duress). They are all manipulated by Connie's street smarts into helping him free his brother Nick.

It's a very long and thrilling night in the Big Apple but nothing deters Connie's determination.

By no means is Connie a decent guy in the eyes of a civilized society, but his caring for his brother Nick is vividly on display in the chaotic night. Everything he does, no matter how ridiculous it looks, works toward a simple goal—to get his brother out of jail. That's at the core of the Safdie brothers' storytelling. Connie is a guy who can be easily dismissed as a junkie criminal, but his effort to protect and save his brother is both heroic and admirable. The filmmaker brothers superbly capture Connie's spirit in a breathlessly fast pace and electrifying fashion.

But why do these characters have to be losers like drug addicts? Can't a story about a brother's dedication be told without having to look into New York City's drug subculture? The audience may have a better time if they don't have to look at these victims of illegal substances.