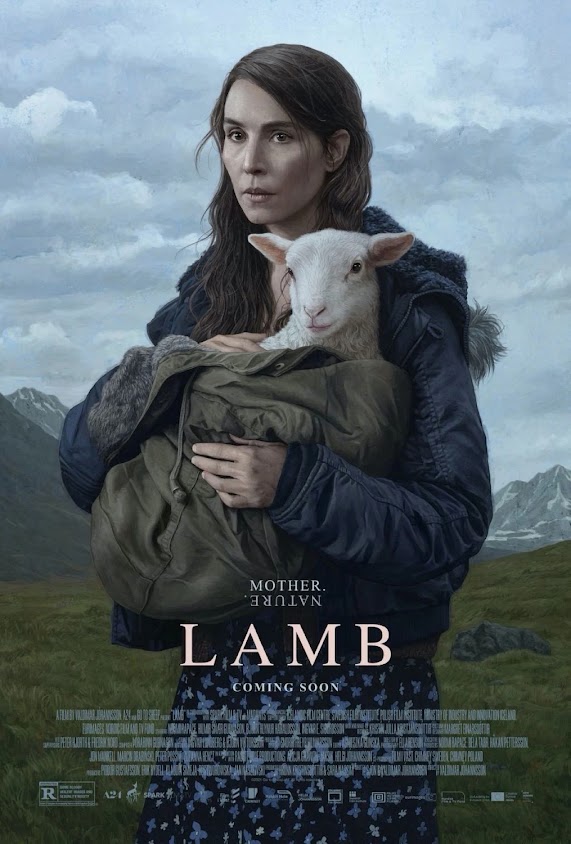 When the first awakening music note hits our eardrums, we see a bunch of startled horses in a whiteout snow storm in the wilderness in Iceland. That remote place is where the mesmerizing story unfolds in the director Valdimar Jóhannsson's striking feature directorial debut "Lamb" (Dýrið | Iceland/Sweden/Poland 2020 | in Icelandic | 106 min.). The film fantastically keeps the enigmatic atmosphere intact and constantly surprises us each time it makes a turn. Its winning of the Un Certain Regard - Prize of Originality at this year's Cannes Film Festival was well-deserved.

On a plain surrounded by a few majestic mountains, Maria (Noomi Rapace) and her husband Ingvar (Hilmir Snær Guðnason) live quietly in isolation and raise a herd of lambs on their farm. Later we know that they are moaning for the loss of their child named Ada, now they keep each other company.

From those inquisitive eyes of their lambs, you always get a sense that something might happen. But the less you know, the better you can appreciate the filmmaker's storytelling.

A chain of events brings out the couple's happiness that they have been longing for, as well as their sorrow they try to escape, and Ingvar's brother Pétur's (Björn Hlynur Haraldsson) unexpected visit also adds more complexity and twists to this captivating folktale.

The director Valdimar Jóhannsson impeccably crafts a masterpiece using the language of cinema. He knows how to provoke your own imagination to fill the picture that's outside the camera frame. For example, it's both intriguing and terrifying when he shows the facial reactions of the two protagonists helping to deliver a lamb, but you never get to see what the characters are seeing, not right away anyway. Like an orchestra conductor, he brilliantly put together the acting, sound, visual and everything else. And you never know what's going to happen from one scene to the next.

The gorgeous cinematography (Eli Arenson) brings out both the beauty of the exotic landscape and the harsh conditions nature sometimes offers. The stunning visual is as unforgettable as the story itself.

This film is the best I have seen so far this year, hands down.