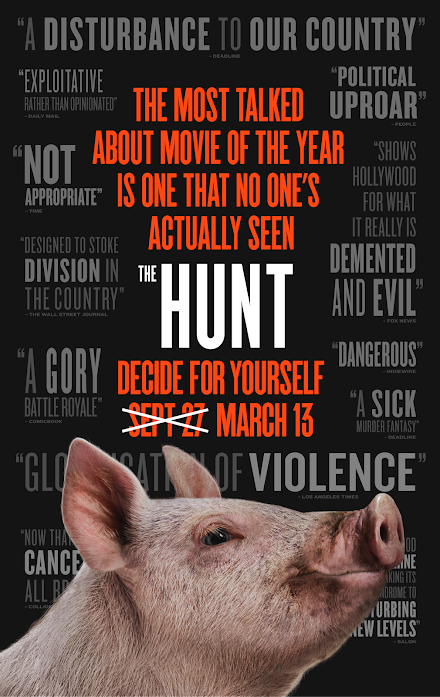 In the deeply divided United States of America nowadays, many right-wing individuals are more likely to fit the profile of being violent and extreme. But the director Craig Zobel's satirical bloody thriller "The Hunt" (USA 2019 | 89 min.) turns the table around and pokes fun at the liberals, without sparing the right-wing as the butt of the joke. This is the most violent movie I have seen in a while. In fact, its violence is part of the reason for the original delay of the film's release last summer when two mass shootings took place in El Paso, Texas and Dayton, Ohio. But despite a thin plot line and the over the top gore, the movie is quite amusing and exciting.

Just think about the following scenario for a second. In order to find an outlet to release the anger and frustration, a bunch of elite liberals come up with a scheme to kill a dozen of people from the right part of the political spectrum, for fun. They round up a few gun-toting, immigrate-hating, global-warming-denying, Trump-supporting, redneck-talking individuals to a secret location and then hunt them for sport. It sounds absurd, doesn't it? But the film remarkably pulls this plot off, while having a lot of fun in the mindset of these liberals who think their targets are a basket of deplorables who deserve to be eliminated.

Gagged like attending the Folsom Street Fair, a group of people showed up at an unknown location. Before they know where they are and why they are here, they get shot, stabbed, blown up, and chased after.

But Crystal (Betty Gilpin) is smarter and tougher than the rest. She outplays her hunters and closes in on the ring leader Athena (Hilary Swank). Once they face each other with Beethoven's music in the background, they finish off the game by a brutal physical fight without sorting off their ideological differences.

The director Craig Zobel keeps the killing spree on the screen lean and efficient. Just a few minutes into the movie, you will lose count of how many of these "deplorables" have been killed. And many of these deaths are quite messy. In fact, some killings are so violent that they appear to be comical. Fans of Japanese gore genre will definitely have a good time watching the hunt in this movie.

Obviously the film isn't providing a feasible solution to the deep division in politics. Rather, it pokes fun at both sides. While it stereotypes people from the right, it also sharply pokes fun at the left. It's hilarious to hear the NPR-listening hunters talking about the need for kidnapping a black victim for the sake of diversity among their victims. That kind of comical tone nicely matches the over the top gore and provides ample amusement.

So, how to resolve the political divide if the hunting game in the film should not be the path for us to take? The coronavirus might offer a clue.