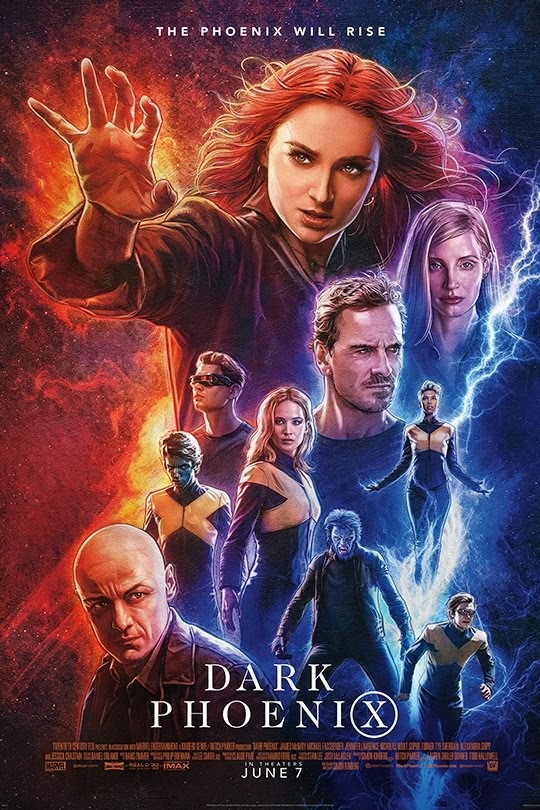 It is harder and harder for the audience to keep track of who is who in the Marvel Comics superhero universe, but that is actually an advantage for making new blockbuster films about these characters, because each new film will have more freedom to tell their stories. The first time director Simon Kinberg proves that no matter how many other X-man movies already exist, he can make a new installment, "Dark Phoenix" (USA 2019 | 113 min.), that is just as fresh and entertaining as one may expect. Based on a comic book, he wrote the script and made his characters both powerful and human. You don't need any prior knowledge about these superheroes in order to be entertained.

We first learn the gifted 8-year-old Jean Grey (Summer Fontana) is able to use her mind to switch radio stations while traveling in a car with her parents in 1975. A tragic accident leaves her under Professor Charles Xavier's (James McAvoy) care at a magnificent mansion that houses many other mutants. Then the film swiftly leaps to 1992 when NASA launches a space shuttle Endeavor and the mission is in serious trouble when the shuttle encounters a cosmic entity.

The President calls Charles for help, and Charles sends a team consisting of the adult Jean Grey, a.k.a. Phoenix (Sophie Turner), the commander Raven/Mystique (Jennifer Lawrence), the doctor Hunk/Beast (Nicholas Hoult), Jean's boyfriend Scott/Cyclops (Tye Sheridan). In a blink of an eye, they are in outer space to rescue the astronauts in the space shuttle. (Wait, why does NASA bother to send a space shuttle when mutants can easily get there instantly?)

During the rescue, Jean collides with the cosmic entity and absorbs its power. But the power becomes so extreme that she can no longer control it. She becomes a threat to the entire mutant family. After discovering secrets of her past, she becomes enraged at Charles and seeks help from a self-exiled mutant Erik/Magneto (Michael Fassbender) to contain her anger, because deep down she still cares about her adopted family.

But before they can sort things out, an army of aliens led by Vuk (Jessica Chastain) arrives to seek Jean's power. A war for survival breaks out on the ground in New York City.

The bar for special effects is higher and higher for a superhero movie, and there is no exception for this latest X-man addition. The writer-director Simon Kinberg and his enormous CGI team do not disappoint the audience in that aspect. Action sequences are clean and exciting, whether in space or on a train. The nice thing about a superhero movie is that it doesn't have to be convincing, and with mutants anything can happen! That gives the director a free pass on his imagination and let the characters run wild.

However, what's remarkable about the film is when the mutants are not in fighting, they are a quite emotional bunch that very human. They seem to genuinely care about each other and devote themselves to the family. Even though the director didn't even bother to convince us about these superheroes' abilities, he did take extra effort to convey their feelings.

I don't know if I would feel the same way about this film if I had read the comic book or remembered these X-men (or X-women) characters, but standing alone, this film certainly serves up a fine piece of entertainment with its dazzling visual effects and reasonable story-line. Plus, how can you resist the amusement of seeing how New York subway trains coming out the ground, in a completely different way as those subway trains in San Francisco.

Comments:
Great review. Emotion is the catalyst of Phoenix’s superpower.