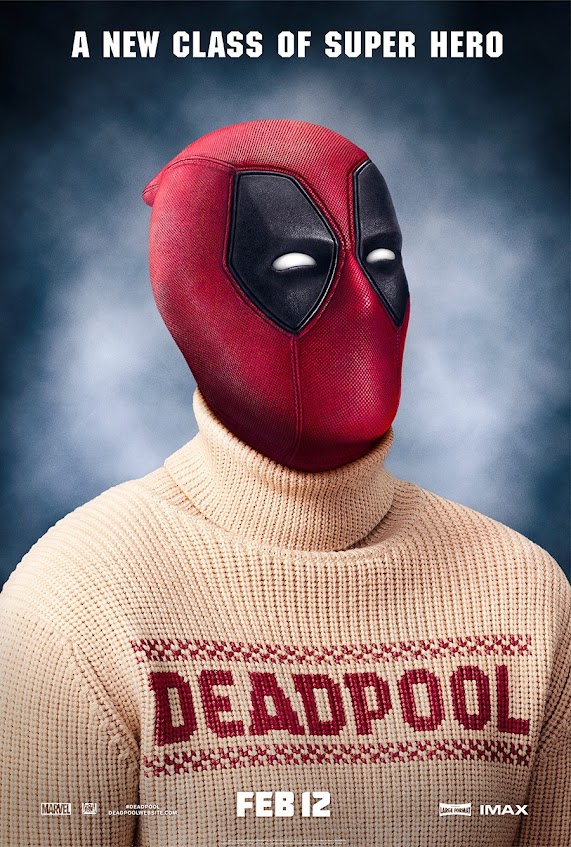 As the award season winds down toward the grand finale at the Oscar ceremony later this month, the super-hero movies based on Marvel Comics begin to wake up from hibernation for the upcoming summer. With endless adaptations of sequels and prequels flooding into the movie complex every year, it is hard and pointless to keep tabs on which is what and who kills whom. They are often predictable, formulaic, mindless, and always violent. With that expectation in mind, I am surprised by this year's first super-hero movie "Deadpool" (USA 2016 | 108 min.), a funny, raunchy, tongue-in-cheek, and violent feature directorial debut from the director Tim Miller. He seems to know too well about the state of super-hero jukebox. Instead of inserting another familiar piece into the overly stuffed super-hero library, he pokes fun at the genre as well as those Marvel Comics characters. That strategy pays off nicely when the film's characters spill smart-ass one-liners as fast as they shoot the bullets.

The film's audacious opening credits sets the playful and spoofing tone when it tells us the film is written by "The Real Heroes," produced by "Real A-hats," and directed by "An Overpaid Tool." The following opening scene violently depicts the bloody background images shown during the opening credits. Deadpool (Ryan Reynolds) in the funny mask is the one who starts the fight and causes the carnage. He claims that he is not a hero, but just a bad guy who fucks up worse guys.

Once he finishes his story, you may feel he is entitled to lash out on the other worse guys. However, these guys are super-beings who cannot really be killed, which makes their fight meaningless, but none of them has figured that out yet.

Before he wears that funny mask calling himself Deadpool, he was Wade Wilson, a handsome cocky bad-ass mercenary who hangs out with his low-key bartender friend Weasel (T.J. Miller). After he meets a strip club waitress Vanessa (Morena Baccarin), the two hit it off like a fruit-fly landing on a loaf of cheese. But that happy episode ends quickly when Wade is told that he has cancer. Of course the film is not going to become a sappy romantic drama. Wade takes on an opportunity to become a self-healing eternal being in a lab operated by a sadistic Ajax (Ed Skrein). The transformation process is more like an S&M session without a safe word and it ruins Wade's handsome looks and turns him into "an avocado that had sex with an older avocado."

Furious about his disfiguring, Wade takes up the nickname Deadpool, puts on his funny outfit, and begins his revenge on Ajax.

It is quite obvious whom this film is aiming at when it constantly references, sometimes even brings in, other Marvel Comic superheroes and never shies away from showing off extreme violence. However, what sets itself apart from other superheroes movies is that this film does not quite play by the rules and it cracks jokes like popcorn machine to please the fan base. Even though some of the jokes may be off-putting to some audience due to its juvenile and sexist nature, they are pretty funny nevertheless and the filmmakers seem to care little about being politically correct. Actually the entire film is like an out of control party in some dudes' basement where they drink, curse, yell, scream, and raunchily enjoy themselves.

That mood can be remarkably contagious with its target audience. The good performances from the lead actors, especially the terrific Ryan Reynolds also help the film to exceed its expectation. Most people who come to this basement party can be sure to have a good time, unless you are Rosie O'Donnell or Sinéad O'Connor.