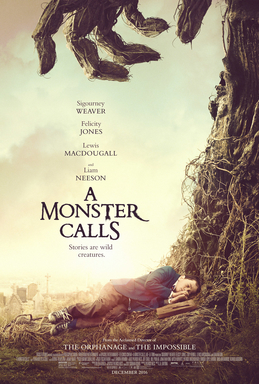 Grieving is never easy. It's even more difficult if you are an introverted teenager boy. In that case, drifting into a fantasy world seems to be a reasonable escape. However, to reveal that world in a coherent fashion may not be an easy task. Based on Patrick Ness's novel, the director J. A. Bayona tries to do just that in "A Monster Calls" (Spain/UK/USA/Canada 2016 | 108 min.). Unless you are a big fan of the book or in a stage of mind similar to the film's protagonist, you will probably have a hard time comprehending that world and resonating with the film's characters.

That unlucky British boy is 12-year-old Conor O'Malley (Lewis MacDougall) who spends most of his time drawing, quite beautifully. He has no friends and is bullied at school constantly. At home, his loving mom (Felicity Jones) is battling with cancer, his divorced dad (Toby Kebbell) is moving away to America, and he hates the outlook that he might have to live with his grandma (Sigourney Weaver). His world is falling apart and he is angry.

He begins to have recurring nightmares, and the big old yew tree outside his window comes to life as a giant monster (voiced by Liam Neeson). The monster shows up at 12:07 every night. The monster proposes to tell Conor three stories. After the three stories, Conor needs to tell a story in return. What's the point of these story exchanges and what if Conor doesn't have a story to tell? Who knows.

So the storytelling proceeds while Conor has to cope with the devastating reality. Remarkably, he seems to learn something from the monster about grieving which he could have learned from reading books or talking to a counselor.

At the beginning of the film, the voice-over describes Conor as too old to be a kid, yet too young to be a man. That could also be said about the film as well. The director J. A. Bayona seems unsure about what kind of story he wants to tell and to whom. The subject matter about dealing with grief is too complex for a young teenager of Conor's age, and its monster tale is plain silly to an adult. That leaves only the fans of the book as the people who might be touched by the screaming and yelling between Conor and the monster.

Although the tree monster isn't as destructive and evil as the monsters in many other films, it is by no means friendly or likable. That creates a visual barrier between the characters and the audience, especially for the skeptical ones. We wait for the monster's transformation from the terrifying looking giant to a gentle soul that can comfort the poor boy, but it never materializes. Conor remains in his fantasy world while we observe his misery at arm's length.

The real world is not always fine. However, living in a fantasy world isn't an ideal way to deal with it. Tree hugging may have therapeutic effects, but only if the tree is the right size with green leaves, unlike the monster in the film.