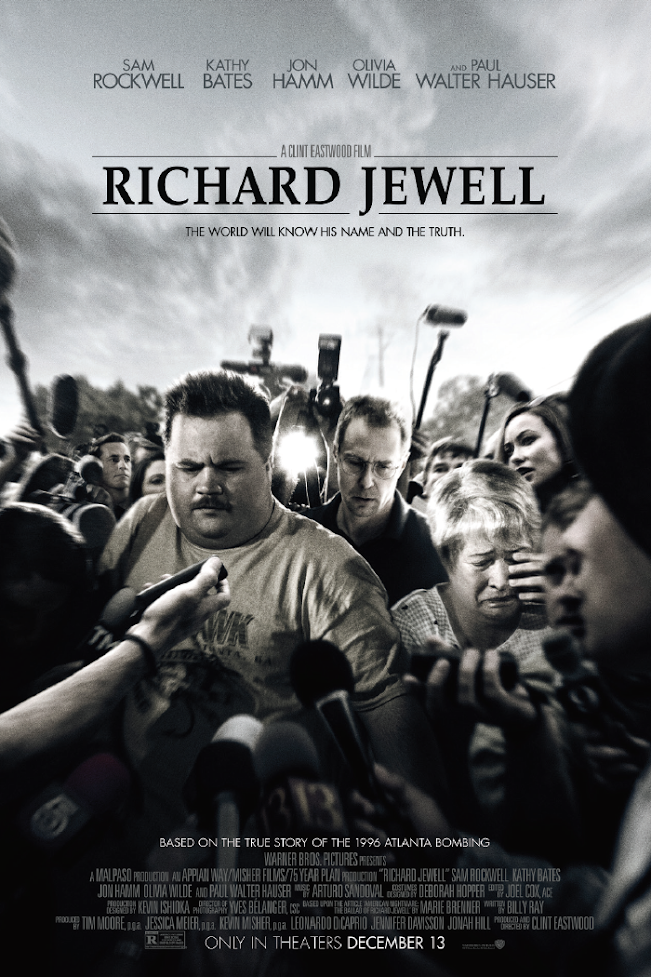 It was a different era twenty-three years ago when a bomb exploded in Atlanta's Centennial Olympic Park that killed two and injured more than a hundred during the 1996 Summer Olympics Games. There were no metal detectors at the entrances like these days, nor were there social media platforms to spread fake news. People got their news from traditional media in those days, but that didn't mean the news media always measured up to the high bar. And of course, the government agencies have never stopped ruining some innocent citizens' lives. The Academy-Award winning director Clint Eastwood took a sharp jab at both the news media and the FBI in his new film "Richard Jewell" (USA 2019 | 129 min.). As a seasoned filmmaker, the director superbly tells the story of the late Richard Jewell, a security guard who was hailed as a hero after the Centennial Olympic Park bombing but became the prime suspect of the bombing shortly after. The seemingly unremarkable Richard Jewell was falsely investigated by the FBI for 88 days and was unfairly treated by the news media. Based on a Vanity Fair article "American Nightmare: the Ballad of Richard Jewell," the film aims to restore Richard Jewell's reputation once and for all, and shows how prejudice and power can destroy ordinary people's lives.

If just judging from the appearance, the overweight Richard Jewell (Paul Walter Hauser) may be regarded as an oddball. He still lives with his mom Bobi (Kathy Bates) even though he is 34 years old in 1996; he cannot hold on to a job for very long; he is fascinated with firearms; and he is overzealous about becoming part of the law enforcement.

During the 1996 Summer Olympic Games in Atlanta, Richard works as a security guard for the Olympic venue, and he takes his job very seriously. During a concert at the Centennial Olympic Park in the evening of July 27, 1996, he spots an unattended backpack under a bench. He alerts security and begins to evacuate the crowd. His diligence significantly reduces the casualties after the explosion of the bomb in the backpack.

From yesterday's nobody, Richard instantly becomes a hero, and Bobi is immensely proud of him. But that fame is cut short when an unethical and ambitious reporter Kathy Scruggs (Olivia Wilde) from the Atlanta Journal-Constitution exposes that Richard is a prime bombing suspect and he is under FBI's investigation, led by Tom Shaw (Jon Hamm).

Considering himself a lawman, Richard initially is eager to help the FBI by volunteering information. But he is not as dumb as the FBI thinks. When he realizes that he is falsely targeted by the FBI, he calls the only lawyer he knows—Watson Bryant (Sam Rockwell), an acquaintance from his previous job.

Despite the fact that the FBI doesn't have any evidence against Richard, Richard and Bobi's lives are turned into a living hell by the investigation and the news media. But with conviction and determination, they fight back the prejudicial and unjust treatment that Richard faces.

The director Clint Eastwood certainly knows his subject as good as his craftsmanship. He doesn't floss over the flawed protagonist and presents Richard Jewell as truthfully as possible. By doing so, he makes us more sympathetic toward Richard Jewell, and angrier toward the overreaching government and the corrupt FBI agents. He clearly demonstrates how dangerous the government and the news media can be, and how they can destroy an ordinary citizen. He superbly creates an arresting character that deserves to be seen beyond the news cycle decades ago and to be remembered as a hero, not a bombing suspect.

The director's vision is perfectly materialized by Paul Walter Hauser's terrific performance. He not only physically resembles Richard Jewell, but also brilliantly illustrates Richard's mindset through his demeanor. He is the key in telling Richard's story.

Now we live in an age of disinformation and artificial intelligence. What if we face false information spread by social media to the public, in addition to profiling by the government? Will there be more victims like Richard Jewell? You bet.