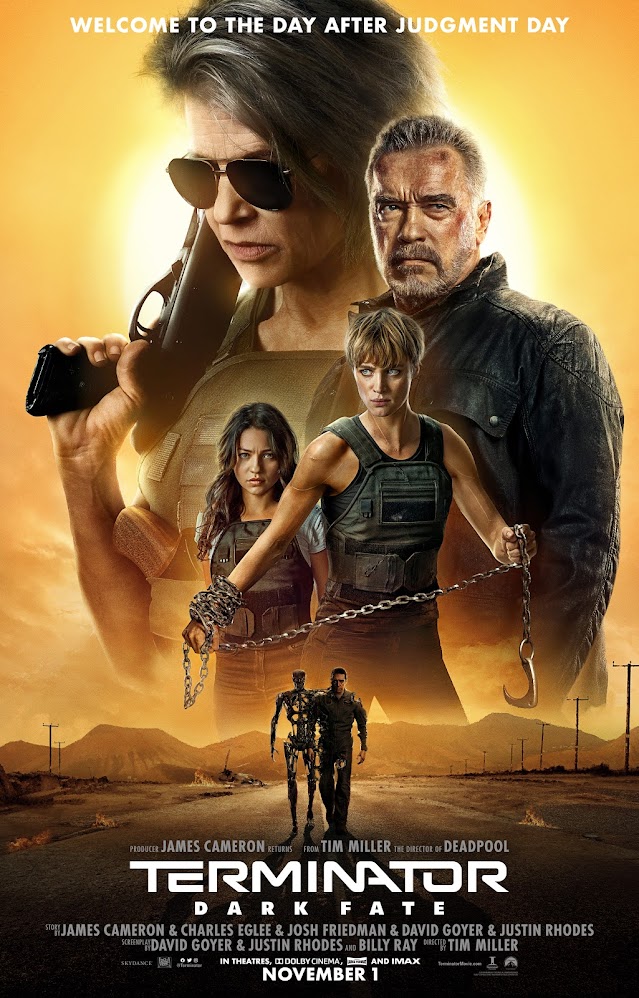 Thirty-five years ago, James Cameron created sleek and lethal sci-fi characters in "The Terminator" (1984) and made "I will be back!" a catchphrase for Arnold Schwarzenegger. Four sequels and three and a half decades later, Terminators are back with spectacular actions and a couple of more heroines in "Terminator: Dark Fate" (USA 2019 | 128 min.), directed by Tim Miller. Despite its fine execution and exhilarating action sequences, the film is a typical and forgettable franchise reboot.

The film starts in Mexico City, where Dani Ramos (Natalia Reyes) and her brother Diego (Diego Boneta) live like every ordinary happy family. Dani has no idea that she is the target of the deadly robots, a.k.a. Terminators, created by humans in the future. In fact, there is no time to reason why she has become the target after a Terminator named Rev-9 (Gabriel Luna) drops from the sky and zooms in on her. Rev-9 is able to transform himself into the appearance of anyone he touches. He also swiftly eliminates anyone in his way, stylishly and terrifyingly.

Also dropped from the sky is Grace (Mackenzie Davis), an enhanced super-soldier from the future who is determined to protect Dani, and never mind the rationale behind Grance's action either. Immediately, you will be dragged into the eye-popping chase sequences, joined by a vengeful Terminator-hunter Sarah Connor (Linda Hamilton).

During the cat and mouse pursuit, Sarah encounters her enemy, the Terminator named T-800 (Arnold Schwarzenegger) who is gruff and aged (apparently AI cannot solve the aging problem). Even though T-800 has decided to be more human and claims himself to be extremely funny, this isn't really a happy reunion. However, unlike the US government, Sarah is able to put her grudges aside and gets on with the mission of saving Dani, as well as the human race.

Of course, the story is not entirely making sense, but that's beside the point of this film. It can get away from logic or physics as long as it creates imaginary sci-fi characters involving time-travel. Instead, the film focuses on actions and CGI spectacles. The director Tim Miller knows exactly how to clearly orchestrate action sequences and cut off the mellow portions in between. He is able to pack the film with action sequences that are entertaining regardless of whether they are convincing.

What's even more delightful is the film's humorous references to our current paralyzed political environment, especially regarding immigration. It's also refreshing for this new installment to focus on its three female fighters in the battle with the robots.

But despite its CGI achievement and nostalgic sentiment toward Sarah and T-800, this is just another forgettable reboot of this aging franchise without much to be remembered. Do you recall what happened on Judgement Day and who killed whom in previous installments? That's okay. You won't remember much in this film either after all the noise fades away.