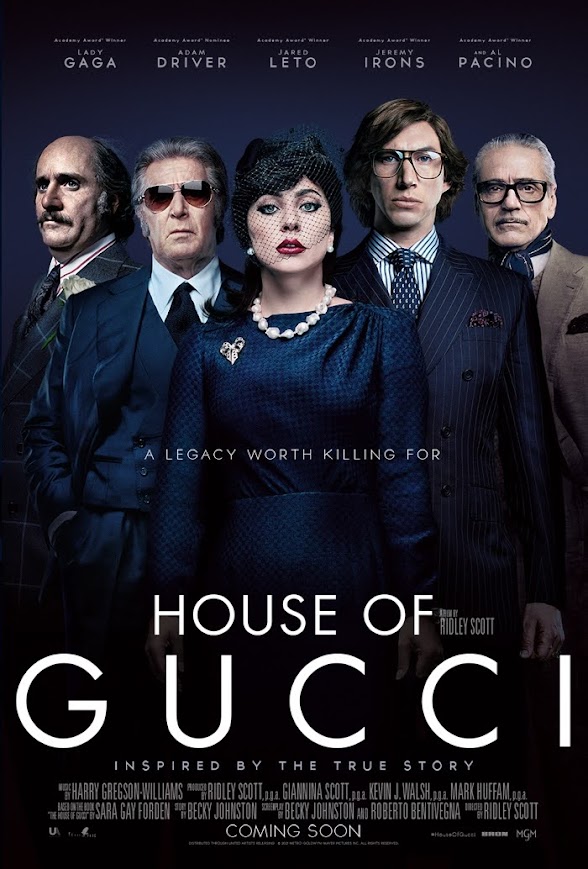 In the fashion world, a brand can add significant value to the products bearing that brand's name. Can that be true when a famous brand such as Gucci is put in a movie's title? Maybe, if the movie is done right. But that's not the case for the director Ridley Scott's new film "House of Gucci" (Canada/USA 2021 | 157 min.). Like a fake Gucci bag, the film is almost like a counterfeit to the director's own body of work. That lack of authenticity can be felt throughout the film, from the acting to the accents; almost everyone seems to be pretending to be real.

The film is based on Sara Gay Forden's 2001 book with a title that summarizes the scandal ridden fashion empire—The House of Gucci: A Sensational Story of Murder, Madness, Glamour and Greed. It would have been interesting if the movie were made by Italians. But instead, it's made by Americans on locations in Italy, and every shot of the Italian city is more real and appealing than the film's characters.

The story starts to unfold in Milan in the '70s. The flamboyant Patrizia Reggiani (Lady Gaga) works at her father's trucking company. When she meets the shy law student Maurizio Gucci (Adam Driver), the only son of Rodolfo Gucci (Jeremy Irons) who runs the Gucci brand in Italy, she knows how to get to his target and win Maurizio over. Sure enough, despite the objection from his father and his uncle Aldo Gucci (Al Pacino), Maurizio gets married to Patrizia.

But getting married into Gucci's family is just the first step for Patrizia as a social climber. She is eying for a much bigger prize after Maurizio's father Rodolfo dies. Patrizia teams up with Aldo to persuade Maurizio to get back into the family business. Then they manipulate Aldo's outcast son Paolo Gucci (Jared Leto) to sell his share. As Maurizio gains more control of the Gucci brand, he grows more ambitious. Meanwhile, he becomes less interested in Patrizia and eventually divorces her. Furthermore, Maurizio makes Aldo reluctantly sell his share and gains full control of the Gucci brand. As his enemies pile up, the Gucci empire is deep in the red, so he brings in Tom Ford (Reeve Carney) as the designer to revive the brand. But does he have the ability to save the Gucci empire, as well as himself?

Even though there is never a lack of drama in this famous Italian family, the film does not have any dramatic moments to be remembered for. Somehow the director Ridley Scott manages to show off the lavish lifestyle of the rich and famous but fails to create convincing characters. From the movie, we can't tell why Patrizia and Maurizio fall in and out of love, and there is no chemistry on screen between Adam Driver and Lady Gaga, no matter how hard they try.

Almost all the actors look like they are awfully conscious of the fact that they are acting, instead of immersing themselves into the characters they are playing. There is only one exception, Jared Leto, who becomes completely unrecognizable by transforming himself into the bald and bullied Paolo. He is the only actor who is so comfortable in playing his character and offers plenty of comic relief. While Jared Leto becomes another person with the help of makeup, Adam Driver oddly looks exactly the same from the '70s to the '90s in the film, except for wearing increasingly more expensive clothes.

This is a film about an Italian family's saga which mostly happened outside the US. It would have made sense if they were played by Italians and spoke their native language. Instead, these characters are played by English-speaking American actors, but they are asked to speak with a funny Italian accent. Occasionally, they spill the word "Grazie!" as if they are practicing a new foreign word they've just learned. It's awkward for the actors to speak, and it's even more distracting for the audience to listen to. Using a fake accent only makes these characters on screen look more fraudulent.

In one scene, Al Pacino's character Aldo Gucci complains to his birthday guests: "I am so tired of you talking." Indeed, he says what is on the mind of the audience who feel cheated by a counterfeiter.