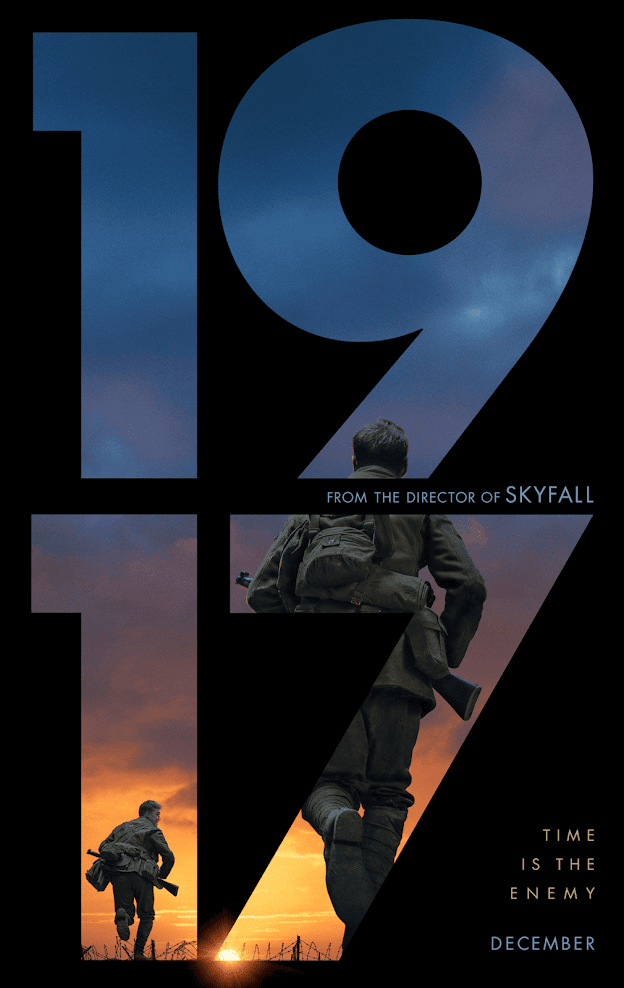 No matter how many war movies you have seen, the Academy-Award winning writer-director Sam Mendes's impeccably crafted World War I masterpiece "1917" (UK/USA 2019 | 119 min.) will guarantee you a breathtakingly immersive war experience. It will sweep you right through the middle of that harrowing war which took place more than a century ago. Besides its stunning technical achievements in cinematography, music, production design, editing, and costume design etc., the director masterfully tells an absorbing story about a couple of war heroes who are not only courageous and brave, but also compassionate and human. This is no doubt one of the best films of the year, if not the best.

The film is inspired by stories told by the director Sam Mendes's grandfather Alfred Mendes, a World War I veteran. On April 6, 1917 in Northern France, the Germans suddenly abandon their trenches and retreat from the Western front. Col. Mackenzie (Benedict Cumberbatch) is going to lead 1600 British soldiers to attack the fleeing enemy in the next morning. But General Erinmore (Colin Firth) obtains intelligence showing that the retreat is a trap. But because telecommunications are cut off, he needs urgently to deliver a letter to order Col. Mackenzie to cancel the attack.

Two messengers Blake (Dean-Charles Chapman) and Schofield (George MacKay) are given the daunting task to deliver the letter across a few miles of no-man's land. They understand the danger lying ahead; they are terrified; yet, they are determined to save the lives of their fellow soldiers, including Blake's older brother (Richard Madden), by delivering the letter before the attack which starts in the morning.

The seemingly simple plot thrillingly unfolds on screen, superbly performed by two lead actors and aided by the triumphant accomplishment from every technical aspects under the extraordinary direction from Sam Mendes. He and his cinematographer Roger Deakins astonishingly compose the entire movie as if it is just one continuous take from start to finish. Even though it's not a single take, you can hardly notice, thanks to the editor Lee Smith.

The one single take effect is not merely a technical exercise, it enhances the storytelling dramatically. As if you have put on virtual reality goggles at the beginning of the film, you are completely immersed into a cold, muddy, and dangerous place where Blake and Schofield must pass through. You are up close and personal to the protagonist during every moment of the film without missing one heartbeat. The experience is both exhilarating and terrifying. Yet, you will hardly notice the painstakingly orchestrated techniques because you will be entirely captivated by what's happening on the screen.

The harrowing war zone in the film is vividly recreated as if you are watching a scene from Peter Jackson's remarkable documentary "They Shall Not Grow Old" (UK/New Zealand 2018). Thomas Newman's brilliant score adds more gravity to each frame.

As if a timeless painting hanging in a museum, with extraordinary realism and stunning visuals, this film illustrates the brutality of World War I and the great sacrifice by the soldiers. These war heroes are all gone by now, but they will not be forgotten.