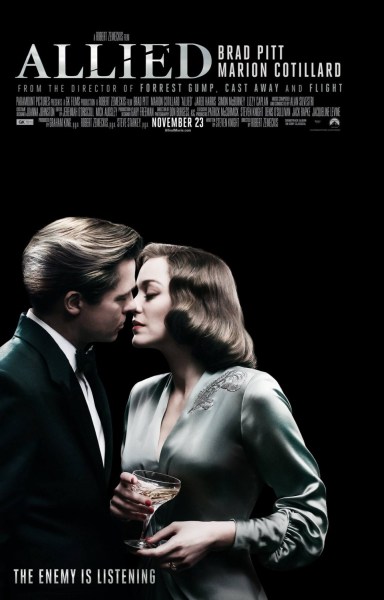 What would you do if you were asked to choose between your family and your country? It might be a rare or even absurd question to ask during peace time. But during World War II, it occurred more often than you would expect. Sometimes the consequence of showing loyalty to your family might mean your own death. That's the excruciating setup in director Robert Zemeckis's ambitious drama "Allied" (USA 2016 | 124 min.) played by mega stars Brad Pitt and Marion Cotillard. However, the film lacks the energy and excitement to fulfill the expectation and the promise from such an extraordinary story.

The film opens in 1942, when Canadian intelligence officer Max Vatan (Brad Pitt) is air-dropped into Casablanca for an operation to assassinate Nazi's ambassador. It's unclear what the significance of such an action would be to the war, except letting Max meet his teammate Marianne Beausejour (Marion Cotillard), an ebullient member of French Resistance posing as Max's wife.

The duo not only easily pull-off the operation like they are playing a card-game trick, but they also fall in love in just a few days. After Max returned to London (why not Canada?), Marianne follows thereafter and they get married and have a daughter.

Despite frequent air-raids, life seems rosy when Max relaxes on the grass in a park as if he is posing for a fashion magazine. But that relatively beautiful life takes a sudden turn when Marianne is accused of being a Nazi spy. Max goes on a mission to prove otherwise in order to save his family.

No matter on the front line or behind it, we all know how brutal and dangerous World War II was. Yet, every operation portrayed in this film makes fighting behind the enemy line look like trivial computer games. As if Max is a skilled gamer, he simply crushes the enemy and succeeds at his every move, in addtion to speaking impressive French to fool Marianne's friends. The film's trivialization of the story takes away the potential thrill of a promising plot. After watching the film, you feel like you have walked into a fancy restaurant expecting an impressive meal, but all you get was a tasteless burger before going out of the door.

Brad Pitt and Marion Cotillard are two fantastic actors. But they have little room to maneuver in playing these unconvincingly written characters. We don't know why they fall in love, besides the fact that they are both beautiful. It's preposterous to see how easy they can get away from the enemy in an environment where even their neighbor is monitoring their every move. Despite the intense security, Max can take an airplane for a joy ride whenever he needs. Really?

Perhaps due to the lack of engagement in the story, Brad Pitt's presence can be hardly registered as Max. When you see his sad face on the screen, you might wonder how he will handle his divorce drama with Angelina Jolie rather than how he will clear Marianne's name. You may drift out of these characters constantly because the film gives you little reason to care about the identity of Marianne.

What would be Brad Pitt's pick if he were asked to choose between his family and his country? With Angelina Jolie leaving him and an indecent human being moving into the White House, I think he might rather be Max when he can just do whatever the director tells him no matter if that makes sense. What a mess.