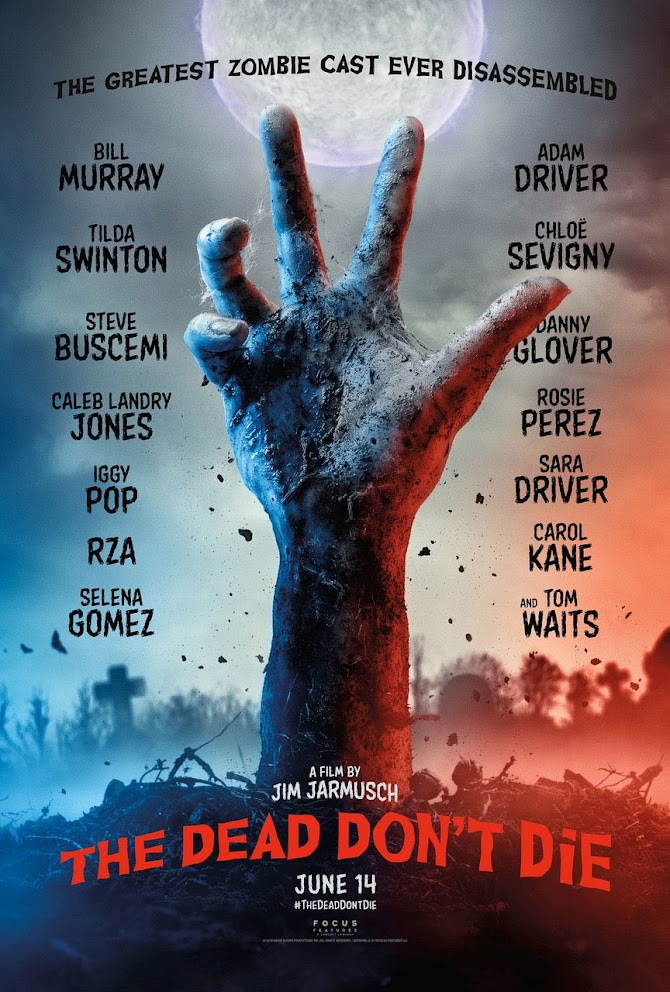 Whether or not you accept the scientific findings about climate change, our planet is in deep trouble. In case you still haven't noticed the dire consequences of global warming in the daily news, the write-director Jim Jarmusch tells you that "this isn't going to end well" in his latest film "The Dead Don't Die" (USA/Sweden 2019 | 103 min.), which opened this year's Festival de Cannes. Even though climate change is deadly serious and nothing is funny about it, this zombie film is rather funny than scary when its deadpan characters face off with zombies' killing spree, which is triggered by the humans' "polar fracking" activities that alter the Earth's axis.

The story takes place in Centerville, population 738. Two low-key cops Ronnie Peterson (Adam Driver) and Cliff Robertson (Bill Murray) are cruising on empty streets in perhaps the only police car in town, while playing a country song "The Dead Don't Die" (music and lyrics by Sturgill Simpson). They stop at perhaps the only diner in town where farmer Miller (Steve Buscemi), wearing a red MAWA (Make America White Again) cap, complaining to Hank Thompson (Danny Glover) that living-in-the-woods Hermit Bob (Tom Waits) has been eating his chickens. Of course, Miller's accusation is fact based, in fact, his cows are also running away due to the irregular solar activities.

The cops also notice that the daylight strangely doesn't fade away, then they get a report that two women in the diner are murdered with their guts eaten. As if the horrific scene is easy to forget, after it has been shown twice (for Ronnie and Cliff to check it out separately), it's shown for a third time when the third cop in town Mindy Morrison (Chloë Sevigny) arrives.

It turns out that this is just the beginning of a zombie uprising due to "polar fracking." Everybody is terrified by the zombies except for a white-haired mortician Zelda Winston (Tilda Swinton) who masters her sword like a true samurai.

With straight faces and calm voices, Adam Driver and Bill Murray perfectly deliver their comic moments and make us chuckle during the first half of the film. But once the zombies start flooding the streets, not only do these slow-moving ugly creatures kill the film's human characters one by one, but they also ruin the comedy. The scenes become repetitive and hardly anything new is added to these characters. The only exception is that the fabulous Tilda Swinton continues to surprise us with her every move of an eccentric character.

While the film's comedy aspect is very much welcomed and appreciated, this really should have been a horror film as well, especially because dealing with climate change cannot be more urgent and not to be taken lightheartedly. If Jim Jarmusch incorporated the horror of "Train to Busan" (부산행 | South Korea 2016) into the latter half of this film, it would be a much different and better film.

Let's hope something effective will be done soon to save our planet. Otherwise, there will be no one left to chop off the zombies' heads and that indeed won't end well.