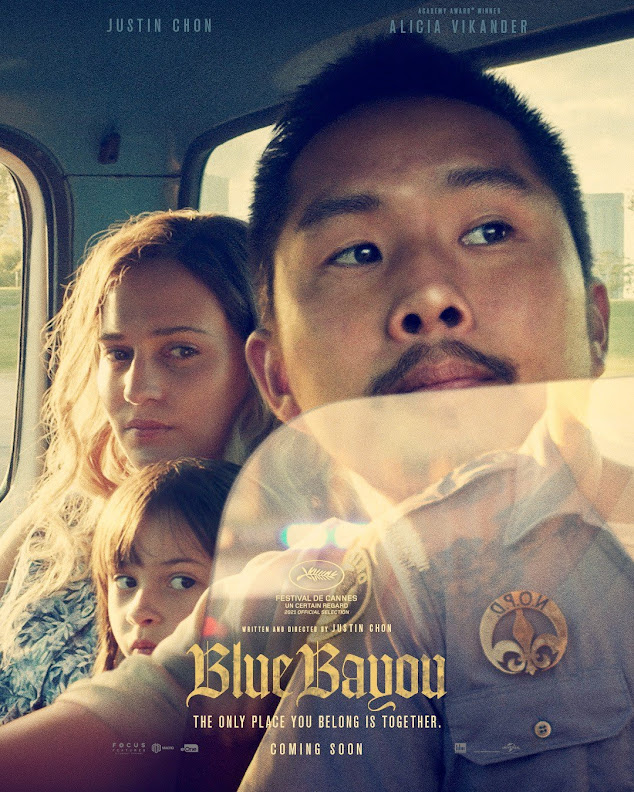 There have been plenty of devastating stories in the news about people being deported to their birth countries despite the USA being the only home they have lived in since a very young age. To add one dramatic account to these stories, the acclaimed writer-director Justin Chon superbly unfolds a heartbreaking immigration drama in "Blue Bayou" (USA/Canada 2021 | 119 min.), premiered at this year's Cannes Film Festival. The film will surely raise more awareness about the inhumane and unjust US immigration policy toward many immigrants who were adopted as young children.

Set in New Orleans, the film opens with a scene in which Antonio LeBlanc (Justin Chon) is asked where he was from during a job interview. In the eyes of many, Antonio doesn't belong to the US even though he has lived in this country for almost all of his life, since he was adopted from South Korea at the age of three by his white adoptive parents. Within just a few minutes into the movie, we see without any doubt that Antonio is the best dad to his adorable step-daughter Jessie (Sydney Kowalske), from his wife Kathy's (Alicia Vikander) previous marriage to a cop Ace (Mark O'Brien).

Being a tattoo artist, this loving husband and dad Antonio cannot earn enough to support his upcoming child with Kathy. But because of his previous arrest record for stealing motorcycles, Antonio fails to get a second job. Things turn worse when he is arrested after an alteration with Ace and his nasty partner. It turns out that Antonio's adoptive parents never obtained the necessary legal document for Antonio to become a US citizen. With his arrest history, Antonio is turned into U.S. Immigration and Customs Enforcement (ICE) for deportation despite the fact that he has been living, legally, in the USA for over 30 years.

Antonio's world is turned upside down. He must figure out how to keep his family together and stay at the only place he calls home.

Justin Chon is no stranger to telling Asian American experiences in his works such as "Gook" (2017) about the 1992 Los Angeles Riot. In this beautifully shot film, with fierce rage and genuine compassion, he creates these characters reflecting those real-life horrendous adoptees' stories that destroy families in the name of immigration law. The wonderful performances from the trio of Justin Chon, Alicia Vikander, and Sydney Kowalske make the family so convincing that the audience will pour profound sympathy toward them. In case you have not been deeply moved enough, at the end of the film, Chon throws in a scene that is nothing short of a Korean drama tear-jerker.

One interesting subplot is Antonio's encounter with a Vietnamese woman Parker (Linh Dan Pham). When Parker asks Antonio to ink a water lily tattoo, Justin Chon uses this character to eloquently characterize the immigration experience by describing water lilies: "they look like they have no roots, but they do, they cannot survive without them."

It would have been better if the film had cut some of the over-the-top behaviors of the bad cop, as if Antonio's misery is due to his bad luck for encountering some bad apples in the law enforcement. It's also rather coincidental for Ace to run into Kathy and Antonio so often in public. But you probably easily forgive those minor flaws when you are captivated by such a gripping story and terrific performance.