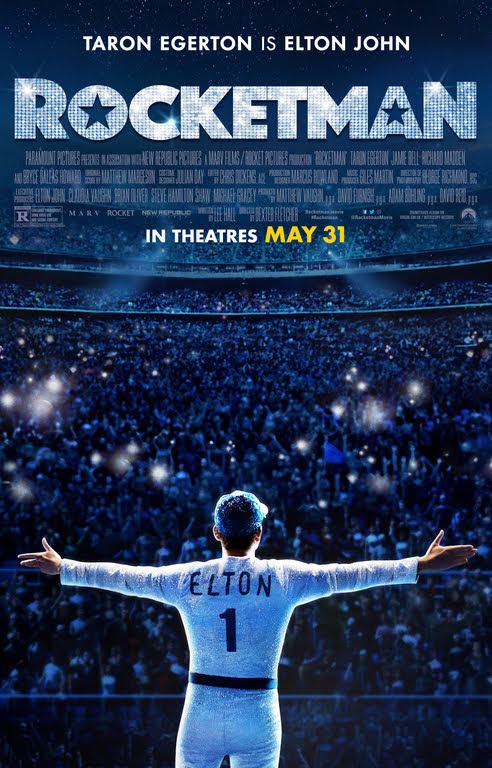 Without any doubt, Elton John is one of the most iconic pop superstars, especially known for his extravagant costumes and eye-wears. The director Dexter Fletcher's energetic musical "Rocketman" (USA 2019 | 121 min.) showcases Elton John's songs and wardrobes while depicting his father issue and addiction during the '70s and the '80s. The film serves as a perfect pitch for Elton John's farewell tour that marks his retirement.

The film begins with Elton John (Taron Egerton), wearing a feather-wing costume and the devil's horns, storming into a rehab support group. Tears in his eyes, he admits right away that he is an addict to alcohol, drug, food, and sex. He cries for help. As a musical number brings on the flashback to his childhood, the diagnosis seems clear-cut—all his troubles are rooted in his unloving father Stanley (Steven Mackintosh). Since he was a child known as Kenneth Dwight (Matthew Illesley and Kit Connor), his mom Sheila (Bryce Dallas Howard) and his granny Ivy (Gemma Jones) have embraced his talent on piano, but his stone-cold father Stanley has no interest in showing any fatherly love toward him.

During another scene with Bollywood style dancing and singing, Reggie grows up and begins to collaborate with lyrics writer Bernie Taupin (Jamie Bell) to write songs under the new identity Elton John.

When Elton John meets the handsome John Reid (Richard Madden), he falls for him immediately. They become lovers and sail into the world of sex, drugs, and rock 'n roll. But after John Reid becomes Elton John's manager, their relationship deteriorates while Elton John's music career takes off.

Despite the wealth and success, Elton John is not happy and continues to search for his father's love that he has never experienced.

The film's director Dexter Fletcher is responsible for rescuing the biopic "Bohemian Rhapsody" (UK/USA 2018) last year when its original director was fired. That film was an electrifying portrait of another pop icon—Freddie Mercury, Queen's lead singer. It might be unfair to compare these two movies because they are the stories of two distinct artists. Yet, it seems inevitable because the director worked on both films that share incredible similarities: each film tells stories about a British gay rock 'n roll superstar during roughly the same period; each film uses an artist's hit song as the title; each film displays the artist's flamboyant on-stage and off-stage personas; and each film has plenty of hit songs.

Despite the high energy and exorbitant costumes and eye-wears, the Elton John character in this film lacks the exhilarating visual appearance compared to Freddie Mercury; even though Taron Egerton is terrific playing Elton John, he doesn't reach to the same intensity as Rami Malek's Freddie Mercury; although this film doesn't whitewash Elton John's homosexuality, it doesn't really explore the theme any deeper than Freddie's either.

The fact that Elton John is one of the executive producers and his husband David Furnish is one of the producers makes us wonder whether the film can be reasonably objective about which stories should be told in the film about Elton John. It may also explain why the father-son relationship ends up dominating the film's storytelling and almost appears to be the sole driving force for Elton John's success and miseries.

The film may be a paean to Elton John's achievements and a prelude to his farewell tour, but it's overly subdued and cautious to be a compelling biopic.