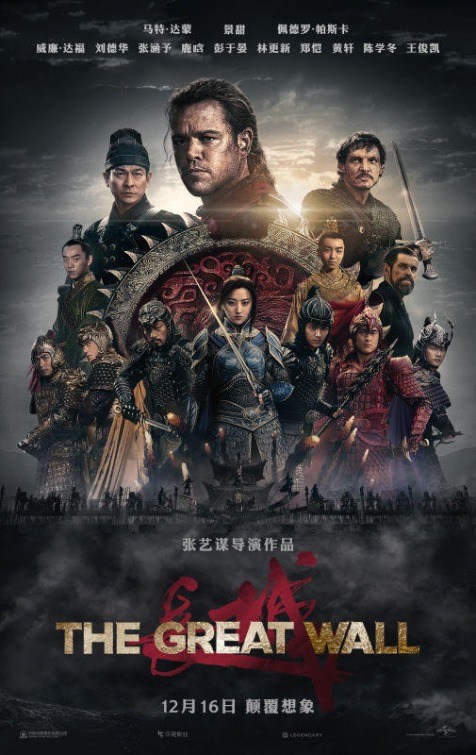 If you want to have some real authentic Chinese food, you probably should not go to a Panda Express restaurant and order broccoli beef, even though day after day plenty of people go there and enjoy that popular western dish labeled as Chinese food. In a similar vein, the legendary Chinese director Zhang Yimou just made a broccoli beef dish by tossing up all the ingredients from Hollywood in his latest big budget monster movie "The Great Wall" (长城 | China/USA 2016 | in Mandarin/English | 103 min.). The film hardly has any Chinese flavor in it, despite featuring the most recognizable structure in China—the Great Wall.

Never mind that the Great Wall was built for generations to guard China against invasions from the north, the script writers in Hollywood came up with an absurd explanation about the wall's purpose by recycling materials from previous Hollywood monster movies. They claim the wall is built to fight Taoties (饕餮), which are horrible-looking flesh-eating monsters, and "the Great Wall is the only barrier to bring the world safe."

Despite that statement, mercenary soldier William Garin (Matt Damon) looks pretty safe from Taoties on the other side of the Great Wall while roaming in the desert with his pal Pero Tovar (Pedro Pascal) searching for gunpowder to get rich. That is, until they are captured and brought inside the wall by emperor's army called Nameless Order, led by General Shao (Zhang Hanyu).

Don't speak Chinese? No problem. The film conveniently installs an English speaking character Commander Lin (Jing Tian). She has learned English from another westerner Ballard (Willem Dafoe) who has been living in the fortress for 25 years while looking for an opportunity to escape with gunpowder. As soon as William and Pero get behind the wall, Taoties begin to attack. William and Pero earn the trust from the Chinese army and join their battles led by Shao and Lin, as well as other Chinese commanders (Andy Lau, Kenny Lin, Eddie Peng, Huang Xuan). 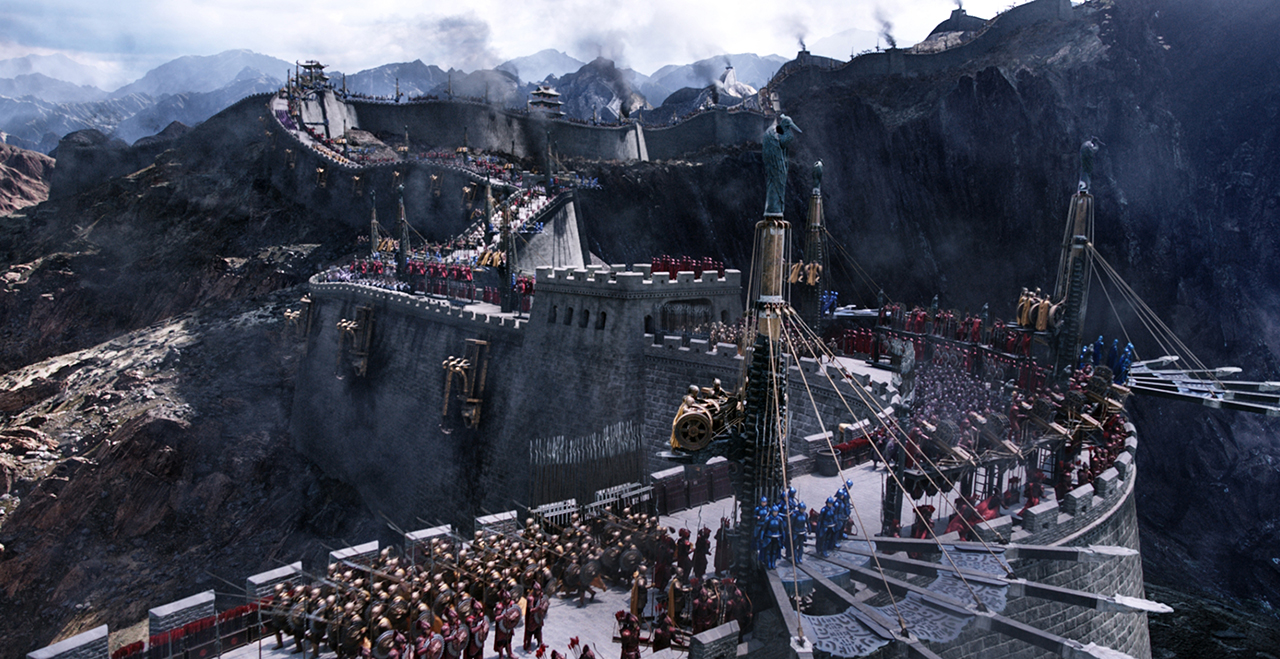 As the brilliant creator of the 2008 Beijing Olympics's magnificent opening and closing ceremonies, Zhang Yimou certainly knows how to put together an extravagant show. In this film, he doesn't fail to impress us with splendid visuals when he lines up the soldiers in the grandest setting—the Great Wall. It's almost like he is continuing the Olympic performances on top of the Great Wall. The movie would have been a much better entertainment if that were all it tries to accomplish.

But no. The movie is trying to use the director's visionary talent to tell a thin and ludicrous story that is stuffed with monstrous creatures similar to those in many other Hollywood blockbusters. It is not only these monsters look familiar, but some of the battle scenes also appear to be recycled. If you replace Taoties with zombies that climb up a wall, you will probably wonder if you are watching a rerun of "World War Z" (2013).

This film is no comparison to some of Zhang Yimou's terrific early films such as "Red Sorghum" (红高粱, 1987) and "Raise the Red Lantern" (大红灯笼高高挂, 1991), in which he told compelling stories that are definitely authentic Chinese. Unfortunately, instead of continuing to cook in a kitchen soaked with Chinese history and culture, he decided to come to Hollywood to cook broccoli beef to feed the appetite of Panda Express patrons, who readily accept it as Chinese. They probably also think the Great Wall was indeed to be built in order to fend off the apocalyptic attack from Taoties.

Let's hope that Zhang Yimou will come back to his Chinese roots soon after visiting Hollywood, and that there won't be any new walls to be built in this world.

"The Great Wall," a Legendary and Universal Pictures release, opens on Friday, February 17, 2017.