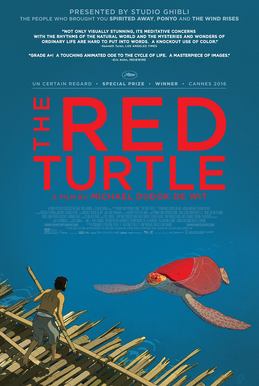 Despite the situation, it's always an extraordinary story to tell about being stranded on a remote island alone in the middle of an open sea. With charming animation and ten years in the making at the renowned Studio Ghibli, the Dutch director Michael Dudok de Wit tells such a fable in his dialogue-free feature debut "The Red Turtle" (France/Belgium/Japan 2016 | 80 min.). There is no question about the film's visual beauty, and you can easily transfer each frame of the film into an art piece hanging on a living room wall. However, it's surprising to observe many overlooked flaws in this film considering the studio's reputation on being painstakingly attentive to details.

In the opening scene, the nameless sailor struggles to stay afloat in the open sea during a violent storm. When he wakes up again, he finds himself alone on a remote island in the middle of a vast ocean. Luckily, he is able to find fresh water in a pound, giant fruits on trees, and the company of a few cute little crabs.

Obviously, the outlook of living like this is not very bright. He decides to build himself a raft to sail out. But as soon as he leaves the shore, his raft is broken into pieces by some invisible force under the water. On his third try and almost 30 minutes into the movie, the film reveals its titular character—the giant red turtle who is responsible for sabotaging the sailor's effort of leaving, perhaps for a good reason.

That red turtle changes his life forever, in a place that seems to be the end of the world. Unlike the protagonist who uses science and intelligence to survive in "All Is Lost" (USA 2013), which is also almost dialogue free, the sailor in this film appears to be more primitive and often to act by instinct. His urge to sail out to the sea with only a few fruits on a raft seems to be irrational. Fortunately, his failure of going out to the sea allows him to stay alive on the island and let the filmmaker continue to unfold his story, no matter how imaginary it might get.

In order to embrace the film's story, you have to take a leap of faith without asking obvious questions such as where the sailor gets his new clothes he puts on in different scenes and where he gets the ropes to build his raft. That kind of details should not have been overlooked by a production stamped with the name Studio Ghibli.

Although the transformation of the main character seems to imply that this film is really a fairy tale, but the undertone of despair suggests it is also a conventional one. Fortunately, there are a few short-lived joyful moments and a few little crabs that provide much needed comic relief. While you may feel sorry for the unlucky sailor's fate, it's unlikely you'll get inspired or impressed by his story. The film doesn't intend to deliver any message, but its intention to present its grand visual appeal is apparent.

The film tells another survival story at the sea, but not an enduring one.