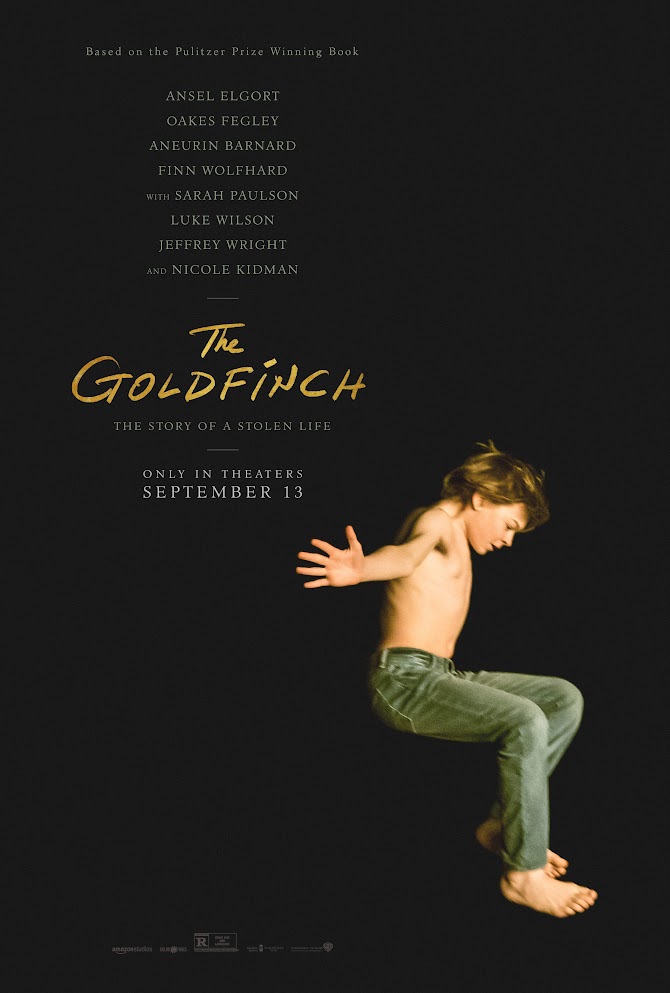 If you have read Donna Tartt's Pulitzer Prize-winning novel, you would probably feel unsatisfied to say the least by its much anticipated motion picture adaptation "The Goldfinch" (USA 2019 | 149 min.), directed by John Crowley. Despite the fine performances and the lush production for an extraordinary story, the film doesn't quite convey the emotions of its guilt-stricken protagonist. That being said, if you have not read the book, then you may enjoy the storytelling about a young man's incredible coming-of-age journey.

The film's title refers to a painting with the same name painted by Carel Fabritius in 1654. Even though the painting is hanging in the Mauritshuis in real life, for the sake of this story it's displayed at the Metropolitan Museum of Art (Met) in New York City.

When 13-year-old Theo (Oakes Fegley) and his mom visit the Met, a terrorist sets off a bomb and Theo's mom is killed along with many others. Covered in white ash and disoriented, Theo arrives at his classmate Andy's (Ryan Foust) home. Appearing in a perfectly tailored and gorgeous, but always different, outfit in every scene, Andy's mom Mrs. Barbour (Nicole Kidman) takes Theo in as part of the family. Gradually, Theo seems to be getting back to normal hanging out with Andy in their daily routines, but he is hiding his grief for losing his mother. Something else he is hiding is the masterpiece The Goldfinch which he walked out of the Met with in the immediate aftermath of the bombing.

But Theo's life takes another sharp turn when his absent father Larry (Luke Wilson) and his girlfriend Xandra (Sarah Paulson) show up. Larry decides to take Theo to the outskirts of Las Vegas where they live in a home surrounded by foreclosed houses. Theo soon forms a bond with a Russian-born Ukrainian boy Boris (Finn Wolfhard) who lives with his abusive father and is probably the only other kid around the neighborhood. The street-smart Boris teaches Theo things ranging from smoking and drinking to sniffing crushed pills. The painting seems to have been forgotten while hidden under Theo's bed.

Before long, this neglected and idle desert life takes another turn for Theo and he comes back to New York City and finds a safe harbor in Hobie's (Jeffrey Wright) antique shop. Years later, under Hobie's mentorship, and adult Theo (Ansel Elgort) becomes a sleek sales-person for Hobie and reconnects with the Barbour family. But his grief and guilt from that fatal day at the Met never goes away. That long forgotten painting which reminds him of his mom's death also comes back to haunt him.

The teenage and adult Theo's odyssey is intertwined by constant flashbacks. But despite the voiceover confession, how the guilt and grief shaped his mental state and his actions never becomes clear. Even more cloudy is how the painting plays a significant role in his coming-of-age, because the painting could have been easily replaced by a piece of his mom's belongings. It's also puzzling that even though the film uses the painting as its title, it never gives the masterpiece a close-up, nor does it explains why Theo decides to hide it instead of returning it to the Met after he became an adult.

The performance from the fine ensemble cast, however, is quite pleasant to watch throughout the film. Jeffrey Wright is particularly impressive as the knowledgeable and philosophical guardian for Theo. Finn Wolfhard is equally impressive, and even amusing, as the eccentric and resourceful bad boy Boris.

Even though the film may not be a perfect adaptation of the novel, it might serve as a two-and-a-half-hour trailer, so you can go back and read Donna Tartt's best-selling book to fill in the blanks left by the film.