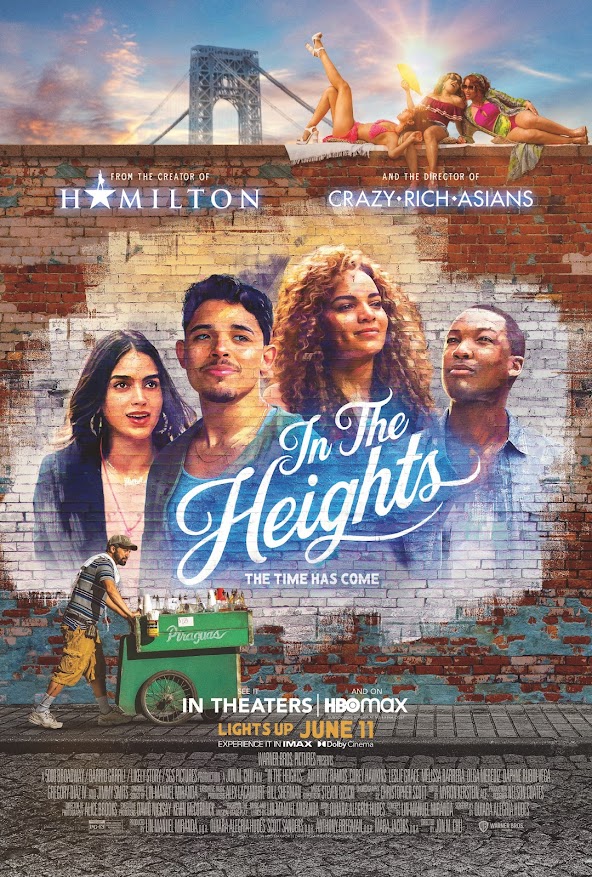 Even before Lin-Manuel Miranda was known for the sensational musical "Hamilton" about one of our founding fathers, he created the Tony-award winning musical "In the Heights" about lives in the vibrant Washington Heights neighborhood in NYC. Teaming up with the director Jon M. Chu who is known for delivering splendid visuals of parties in films such as "Crazy Rich Asians" (2018), he transformed his love letter to the Heights into an exhilarating movie "In the Heights" (USA 2021 | 143 min.). This energetic and uplifting film is a perfect and exuberant fiesta to celebrate the end of the pandemic that has kept this film on the shelf for a year. It tempts you to jump off your seat to join the singing and dancing and to shake off all the blues accumulated during the past depressing year.

The film's first electrifying number is full of life, energy, hope, and joy, which pretty much sets the tone for the remaining running time. The narrator is Usnavi (Anthony Ramos) who owns a bodega near the 181st Street metro station in a close-knit Latino community. Even though the store is a hot spot in the neighborhood, he hopes to move back to the Dominican Republic to revive a bar his late dad used to own. His childhood friend Vanessa (Melissa Barrera) works in a hair salon, but has her own aspiring dream to become a fashion designer. Usnavi's charismatic teenage cousin Sonny (Gregory Diaz IV) works hard in the store and envisions his future of getting into college. Although we don't see their moms in the film, the childless Abuela Claudia (Olga Merediz) is a loving grandmother figure for them all.

Another "grandchild" of Abuela's is the Stanford freshman Nina (Leslie Grace) who feels out of place at Stanford and longs for her community and her dispatcher boyfriend Benny (Corey Hawkins) at home. But Nina's father Kevin Rosario (Jimmy Smits) is determined to support Nina's education even if he has to sell his business.

The story, as well as the singing and dancing, starts three days before a power blackout due to a heat wave. By the time the power returns, many of these characters come to terms with what home means to them.

As if there is an underground organizer for flash mobs in the neighborhood, again and again, a group of dancers magically appear together on a musical cue and put on a spectacular show for each number in the film. Not only is the choreography (Christopher Scott) mesmerizing including moves from hip hop, salsa, ballet, and tango, but also the fantastic dancers are of all sizes, ages, genders, and colors (okay, maybe except white, given the demographic in the real-life Heights). The camera (Alice Brooks) slides as smoothly as the dancers' moves and pulls you right into the middle of the joyful crowd to become part of it.

While Lin-Manuel Miranda's terrific songs provide the substance, the director Jon M. Chu superbly transformed the musical onto the big screen and added more magic to it. The film is the best entertainment you can wish for after a long hard year. Even though this year's train-wreck Oscar ceremony just ended not long ago, it's not too early to predict that this film will surely have a ton of Oscar nominations early next year.