Once Upon a Time in ... Hollywood 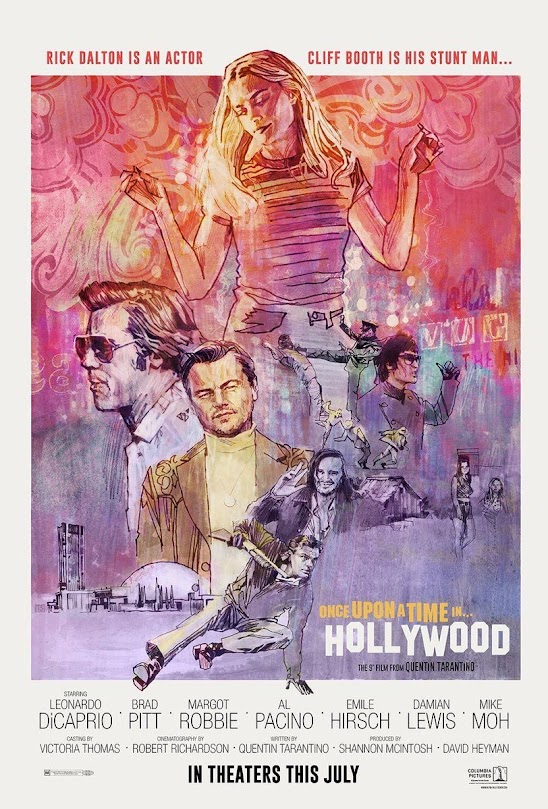 It's probably hard to find another avid cinephile as passionate as the writer-director Quentin Tarantino. In his latest (the 9th if you lost count) film "Once Upon a Time in ... Hollywood" (USA 2019 | 161 min.), he put his love and nostalgic sentiment for cinema on full display with warm colors and vintage props. The film is a spectacle of the old-school filmmaking and an affectionate tribute to the '60s Hollywood.

When the film opens in 1969, we are introduced to the film's protagonists Rick Dalton (Leonardo DiCaprio) and his stunt double Cliff Booth (Brad Pitt), interviewed by a TV-host on a movie set in Hollywood. Rick is a fading actor who is known for his role in a popular TV western series as well as for other Nazi-fighting roles in films (a nod to the director's previous films). Although the chain-smoking Rick looks tough and macho outside, he is quite sensitive and emotional at times. Because of his alcohol problem, his laid-back buddy Cliff also works as his chauffeur off the movie set.

To live in the center of Hollywood and be among the rich and famous, Rick rents a place on Cielo Drive, next door to the mansion where the film director Roman Polanski (Rafal Zawierucha) and his wife Sharon Tate (Margot Robbie) live. Cliff, however, happily lives in a trailer with his dog next to a Drive-In theater, and eyeing at hippie girls on the streets when he cruises in Rick's bulky car.

One of the girls is Pussycat (Margaret Qualley), a flirtatious jailbait hitchhiking at a bus stop. When she finally gets into Cliff's car, she leads him to the Spahn Movie Ranch, where the notorious Charles Manson (Damon Herriman) and his followers live.

While Cliff crosses paths with the hippies on the ranch, Rick struggles with his alcoholic addiction and playing his role on the movie set. As his stardom begins to collapse, his agent Marvin Schwarzs (Al Pacino) tries to get Rick and Cliff over to Italy to make Spaghetti Westerns films. The rest of the story steadily unfolds revolving around the daily lives of Rick and Cliff, both on and off the movie set.

As if a kid showing off his favorite toy collection, Quentin Tarantino makes sure that every piece of B-movie posters, neon signs, vintage cars and clothes, even women's feet are gorgeously captured in his frames and projected to the big screen. He takes his time to proceed with each scene and jams in as many references about cinema and filmmaking as possible. It's a nostalgic feast for cinephiles and a sharp contrast to the more and more common CGI productions.

The film is often tongue-in-cheek funny, but it also contains scenes that are terrifying and suspenseful, which make you appreciate Quentin Tarantino's playfulness and ingenuity as a filmmaker. Of course, violence is never a side dish in his films. Yet, this film just offers the right dose of violence as his signature.

Both Leonardo DiCaprio and Brad Pitt are fantastic in their roles. It's enormously entertaining to see them going back in time to be a movie star or a stunt double in the film business. Despite the six-minute standing ovation received when the film premiered at this year's Festival de Cannes, it came home empty handed without receiving any award. But that will surely change during the upcoming award season. Without a doubt, the film will be a strong contender in many categories, including recognizing the outstanding performances by these two accomplished actors.