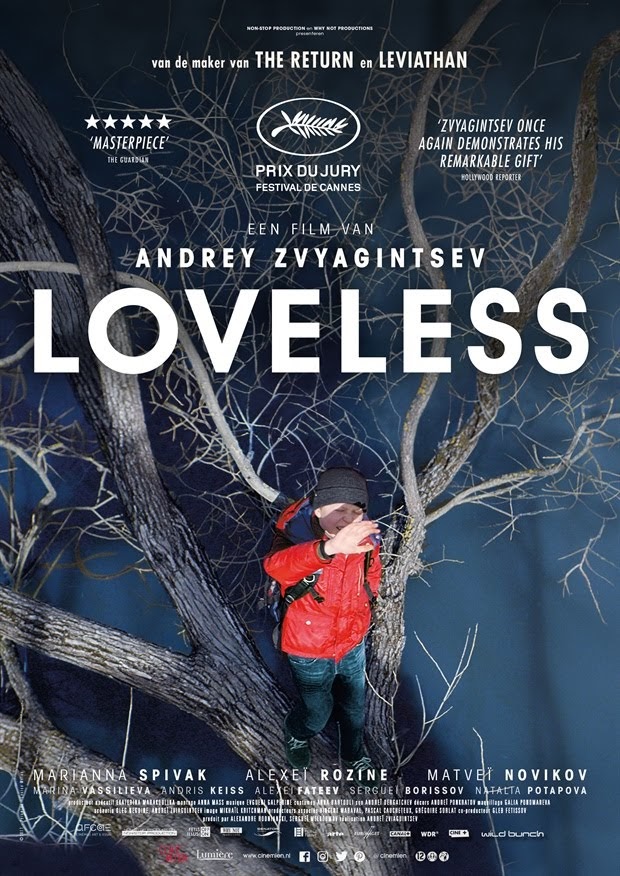 Just like he did in his previous films, the acclaimed Russian director Andrey Zvyagintsev (Андре́й Звя́гинцев) continues his portrayal of human suffering in his fifth feature "Loveless" (Нелюбовь | Russia 2017 | in Russian | 127 min.), and for the second time has been nominated for an Academy Award for best foreign language film. The film also takes another jab at Russia's bureaucracy and paints a pessimistic outlook of Russian society. It bluntly puts two selfish characters who you want to hate on vivid display. Not only are these characters loveless toward each other, but they also get no love at all from the director.

Perhaps the one who suffers the most from being loveless is the 12-year-old boy Alyosha (Matvey Novikov). He silently cries behind a door while listening to his divorcing parents, Zhenya (Maryana Spivak) and Boris (Aleksey Rozin), arguing about why the other party should take the boy. It's not that Shenya and Boris lack the ability of showing affection. They are quite busy spending time with their own respective lovers when they are not checking their smart phones. They just have nothing nice to share with each other, or with the unwanted boy.

The two selfish adults pay no attention to Alyosha and they have not noticed that the kid has not been home for two days. They blame on each other for the boy's disappearance and begin a frenetic search all over the places including the home of Zhenya's grumbling mother, who wants to have nothing to do with either her daughter Zhenya or her missing grandson.

The search for the missing boy by Shenya and Boris is not motivated by their remorse or new-found love, but only out of concern about how they will be perceived in Russian society and in their own social network. Since the bureaucratic police can offer little help to the search, they turn to an incredibly well-organized volunteer team for help. As snow falls on the icy-cold landscape, the search for Alyosha continues.

From the haunting music score to the stunning cinematography (Mikhail Krichman), the director Andrey Zvyagintsev utilizes every resource in his unsentimental story-telling. He slowly unfolds a devastating yet captivating story that serves as a metaphor for the increasingly apathetic Russian society. He is not subtle about this intention, letting Zhenya run on a treadmill wearing a jacket with the giant RUSSIA printed on the front, even though the connection feels a little bit forced.

However, there is no question about what the protagonists represent—many of today's middle class who are glued to their smart phones, lack human connections, and have little love to give in today's society. You wonder why there are people who still fall for people like Shenya and Boris.

But the film is not completely without hope. There are still good people such as those volunteers who let you keep on having faith in kindness and humanity.

Although this film is not as pointy as the director's "Leviathan" (Левиафан | Russia 2014), it jolts us alarmingly just as the striking music does at the film's opening. It is time to wake up.