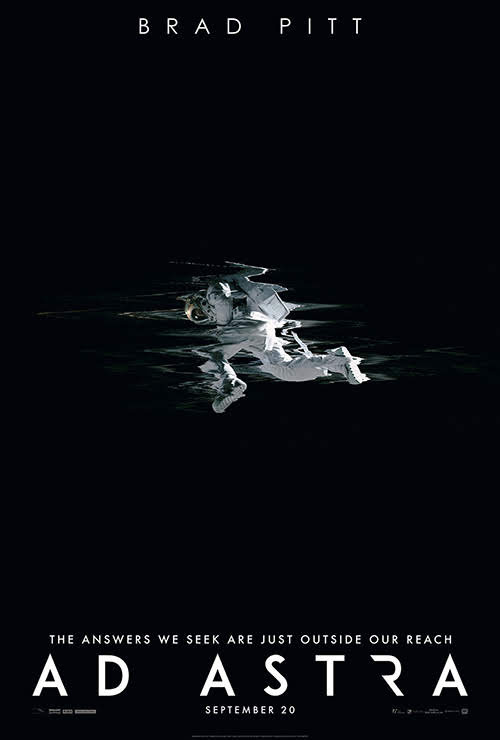 Sir Arthur C. Clark once famously wrote: "Two possibilities exist: Either we are alone in the Universe or we are not. Both are equally terrifying." Yet, space exploration has captivated the imagination of both scientists and artists. There are great films such as "Gravity" (2013) that depict the exhilarating experience about going into outer space, and the frightening effort to try to get back on earth, if at all. But the director James Gray's sci-fi movie "Ad Astra" (USA 2019 | 124 min.) isn't about a thrilling mission of going out of and getting back on earth, rather, it tells a human story unfolding beyond the earth. The film's Latin title means "To the Stars," although its story is quite down to earth. It tells the story about a father-son relationship, while showing us plenty of terrifying moments and spectacular imaginary visuals from outer space.

That son is the focused, confident, and intelligent astronaut Maj. Roy McBride (Brad Pitt) whose pulse rate never exceeds 80 beats per minute no matter under what stressful situations. His unattended father is Clifford McBride (Tommy Lee Jones), a devoted astronaut who leads an exploration mission named Lima Project near Neptune to search for other intelligent lives in the Universe. But the project went dark sixteen years ago when Roy was only 16 years old, and Roy believes his father is dead.

After a series of dangerous electrical surges that cause catastrophic damages on earth, Roy is summoned to go on a top-secret mission to go to Neptune. That's because the U.S. intelligence believes the source of the electrical bursts are coming from the Lima Project and Clifford is still alive and responsible for it. After a stop-over on the moon, Roy is deployed to a military base on Mars where he attempts to make contact with his dad Clifford. If he can establish communications with Clifford, he will travel to Neptune and destroy the Lima Project in order to save the earth and the solar system.

That's a tall order to fill, even for the gifted Roy. When he realizes that his father Clifford is actually alive and he has to persuade him to give up on the Lima Project to save the earth, his heart beat starts to quicken, his assertive voice begins to tremble, his psychological screening begins to flunk, and his emotions toward his dad begin to bubble up.

Even though the setting is not quite convincing (you can open a door when a spacecraft begins to launch, really?) and sometimes rather confusing (what planet are we looking at?), the human story always takes the center stage in the story and the director James Gray patiently let Roy's emotion build up, often in a solitary environment. He also paints a grim picture for the colonized Moon and Mars. Will humans mess with other planets after the Earth is torched up?

To watch Brad Pitt play Roy is pure pleasure. Even though he has two more decades' worth of wrinkles than a 32-year-old, his demeanor and expression perfectly convey taciturn Roy's mind—a strong and wounded soul that both admires and resents his absent father. His deep voice-over resonates as if he is reciting Sir Arthur C. Clark.

Apparently, daddy issue is a more urgent matter to resolve before we figure out if we are alone in the Universe.