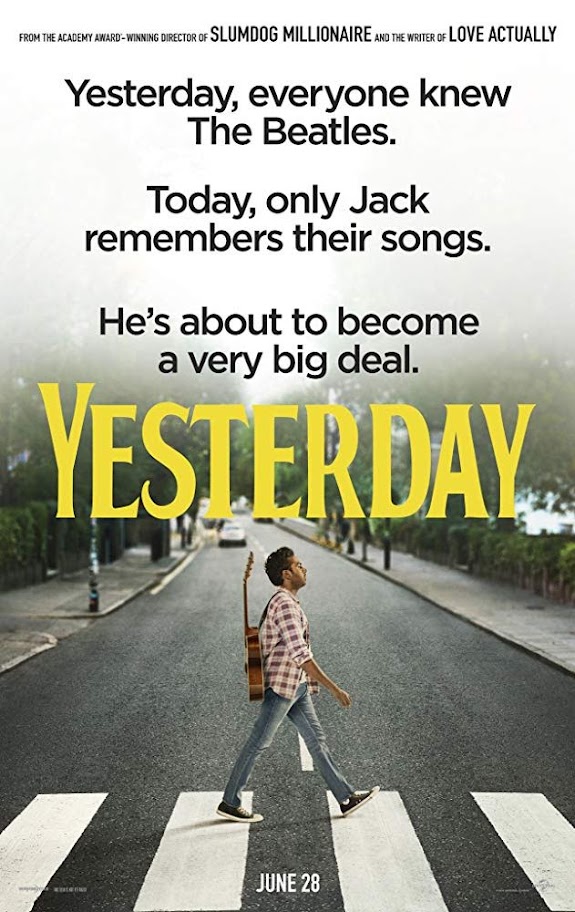 The Beatles is clearly one of the most celebrated bands in history not only because of those great songs they wrote and performed, but also because of their personas. Everyone can sing Beatles' songs, but none of them can recreate the Beatles' magic. But that doesn't mean one won't keep trying. Fondly paying tribute to the Beatles, the director Danny Boyle's new romantic comedy "Yesterday" (UK 2019 | 116 min.) gives that idea a try under a radical circumstance, but it only proves to be futile.

The story is set up on a quite amusing and intriguing "what-if" scenario: can you imagine a world in which no one has ever heard the Beatles' songs? Well, almost no one, except Jack Malik (Himesh Patel), a struggling amateur musician from Suffolk. He works part-time in a warehouse and performs from gig to gig with his childhood friend Ellie Appleton (Lily James) who acts as his manager and drives him around.

During a brief and bizarre world-wide electricity blackout, Jack is hit by a bus. When he wakes up in a hospital, he finds out that two of his front teeth are not the only thing that got lost because of the accident: the entire collective memory of the Beatles, among a few other things, is completely wiped out from society, except from Jack's memory.

When Jack sings Yesterday, his friends are completely awestruck by the song thinking it's written by Jack. Finally, he sees an opportunity in his music career and begins to sing the Beatles' songs as if they are his own work.

Jack's "songwriting talent" is taken notice by other musicians like Ed Sheeran (playing himself) and his manager Debra (Kate McKinnon) who promises to make Jack a super star. Jack is facing a tough choice between fame and his relationship with Ellie.

The film's setup has a huge potential to explore deeper about how the Beatles' music became legendary and what the pop-culture would be like without the Beatles. Instead, the director Danny Boyle follows the romantic comedy playbook and lets Jack and Ellie's courtship take center stage. Unfortunately, the chemistry between the two protagonists is only on paper but not on screen, and their love story is dead on arrival.

Since the romantic part isn't compelling, let's turn to the music. Even though Jack is a not-so-bad singer, it's unlikely that he is able to reignite the Beatles' excitement whenever he recites a Beatles' song. But the world is overwhelmed by Jack, so the magic must lie within the music. Yet, the film failed to establish that.

That doesn't mean this film is not occasionally funny and delightful to the ears—it plays the music of the Beatles after all! There are quite a few comical moments that can surely please a crowd and trigger chuckles, especially whenever Kate McKinnon appears on screen.

Too bad the film's promising high concept is ruined by a lame romantic plot. Luckily, we all still remember the Beatles and their iconic song Yesterday to be entertained by the film.