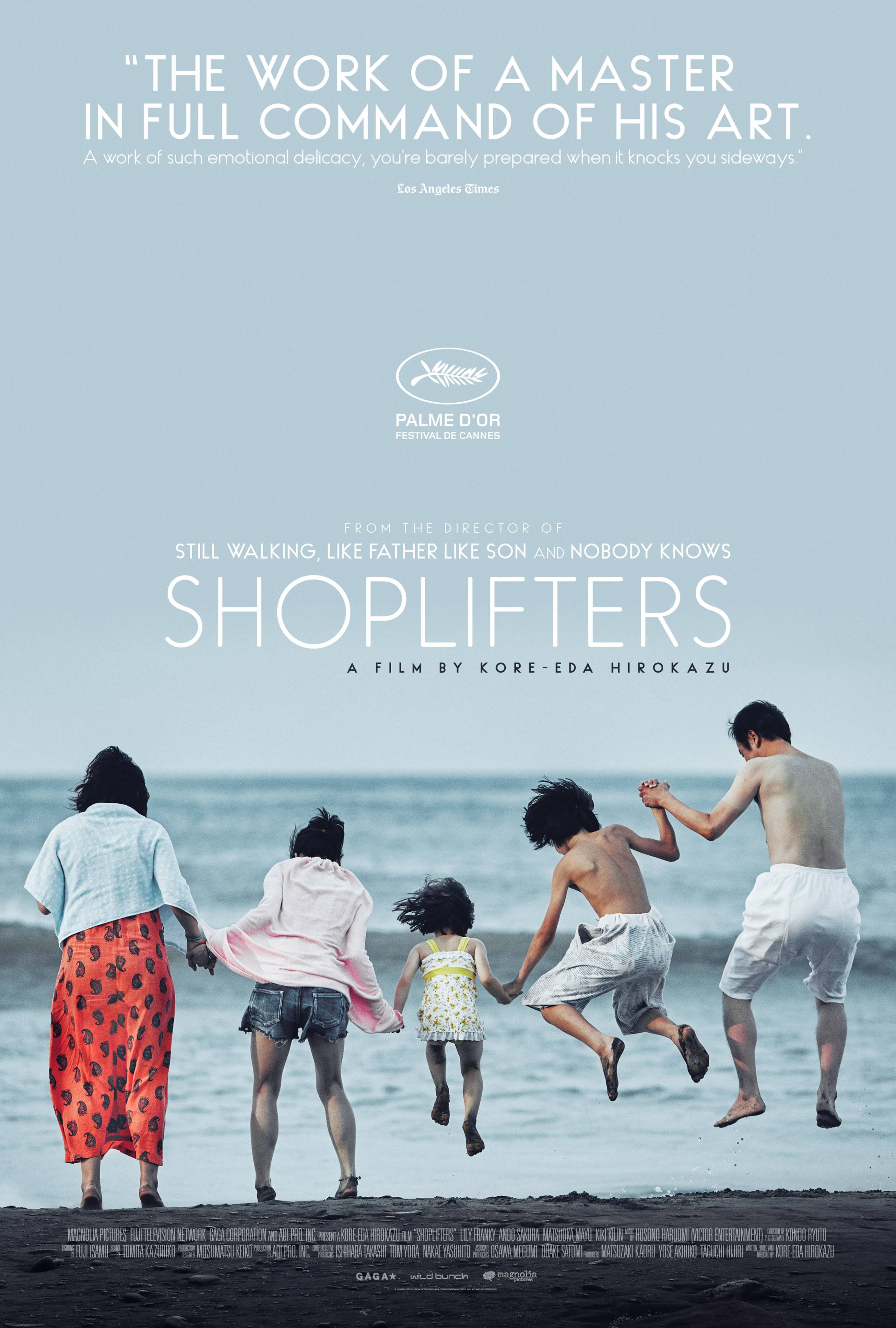 With more than a dozen films over two decades, the renowned Japanese auteur Koreeda Hirokazu (是枝 裕和) has told many compelling stories about family bonds and created mesmerizing and adoring characters that touched our hearts. He has the extraordinary ability of communicating with us in a quiet and humble manner, yet he ingeniously utilizes his splendid storytelling style and reaches us in the form of humanity that is beyond the scope of language and culture. One film after another, we are profoundly moved and completely awestruck by his marvelous craft. He is definitely one of the best writer-directors of our time.

It's no surprise that his latest film "Shoplifters" (万引き家族 | Japan 2018 | in Japanese | 121 min.) won the well-deserved Palme d'Or at this year's Cannes Film Festival and was selected as Japan's submission for foreign-language Oscar. It is easily the best film I have seen this year and I am pretty sure it is on its way to collect the Oscar.

At the beginning of the film, after stealing a bag of groceries, Osamu Shibata (Lily Franky) and his son Shota (Jō Kairi) finds a 5-year-old girl Yuri (Sasaki Miyu) is outside alone in the cold. When Osamu takes Yuri back to the cramped little home, Osamu's wife Nobuyo (Andô Sakura) complains to him about taking in another mouth to feed. However, once they see the burn mark and bruises on Yuri's arms, Yuri is immediately accepted as the youngest addition to this three-generation family, despite any potential kidnapping concern. They give Yuri a new name Lin. Meanwhile, Yuri's parents seem happy to get rid of her and don't even bother to report her missing to the police.

Besides the limited pension from grandma Hatsue (Kiki Kirin), all the adults in the family actually have jobs. Osamu works at a construction site, Nobuyo does shifts at a dry cleaning shop, and Hatsue's granddaughter Aki (Matsuoka Mayu) strips behind a glass. Although their earnings are not enough to get by, they are together as a happy family.

When Yuri (Lin) is discovered by the authorities, the family's harmony is interrupted and more secrets come to light which shake the core of this family.

Similar to the heart-wrenching "Nobody Knows" (誰も知らない 2004), the writer-director Koreeda Hirokazu is a master of bringing out the best performance by children. He makes your heart melt with their happiness and makes your heart weep with their unbearable suffering. The two innocent children in this film superbly convey the poignant tale.

In addition to the two young actors, the entire cast is fantastic in the film. Andô Sakura delivers one the most unforgettable and heartbreaking scenes in the film when she is questioned by the police. The director's longtime collaborator, beloved actress Kirin Kiki (樹木 希林) played her last role in this film before her recent death to cancer. It's hard to imagine that she won't be the grandma figure when Koreeda Hirokazu tells his next story about another family.

Although the film is once again about a family, unlike other families in the director's previous films, this family is an atypical one. As the film's title indicates, the marginalized family members are petty thieves in a society where the Japanese value honesty with high regards. However, regardless of their flaws, they are the most likable and loving characters that capture our hearts and make us cry.

As a follow up to "Like Father, Like Son" (そして父になる 2013), Koreeda Hirokazu continues to raise the question of what constitutes parents. If one could choose, Yuri obviously would prefer the love from her kidnapper family vs. her abusive birth parents.

Even though living in poverty, these characters remarkably enjoy their happiness in their little space and their joy is contagious. They might be short on money, but they never lack love and affection. That's what a family should be.