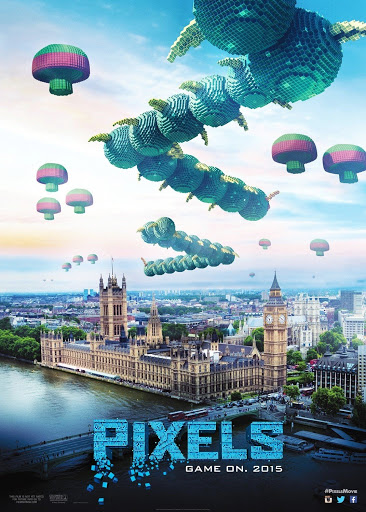 Earlier this week, scientists felt jubilant to receive $100 million Russian money for alien search, and cosmologist Stephen Hawking emphasized that "we must know" if there are intelligent creatures out there. What he probably doesn't know is that Hollywood already spent $110 million on one single movie called "Pixels" (USA 2015 | 105 min.), and the movie has figured this all out already—Yes, indeed there are aliens and they look like Pac-Man from an arcade game decades ago. Worse, they are coming down from the sky to destroy us. However, judging from the characters in the film, you probably want to root for the aliens thinking the human beings down below deserve their fate, at least for their stupidity.

Back in 1982, when Pac-Man is an extremely popular arcade game, 13-year-old Sam Brenner (Anthony Ippolito) becomes exceptionally good at it playing with his best friend Will Cooper (Jared Riley). But they are not good enough and lose the championship title to Eddie Plant (Andrew Bambridge), nicknamed "The Fire Blaster." Nevertheless, the footage containing the game is sent to the space by NASA in search of aliens.

When you blink your eyes, the film abruptly leaps to present day when Sam (Adam Sandler) works as a handy-man, and the not-so-smart Will Cooper (Kevin James) becomes the President of the United States! That actually might not be entirely unconvincing if you recall who was Obama's predecessor or if you compare this setup to the rest of the plot in the film. When Sam finishes an installation job at Lt. Col. Violet Van Patten's (Michelle Monaghan) home, he gets a call from the President because the US military base in Guam is under attack by Pac-Man. It turns out that Pac-Man actually exists in outer-space and it wants to play a final game with the human world.

Will, the President, obviously has more faith in Sam than his national security team including a hawkish and grumpy Admiral Porter (Brian Cox). He lets Sam be in charge of fighting back aliens. Joined by their paranoid childhood friend Ludlow Lamonsoff (Josh Gad) and the game champion but now a criminal Edie (Peter Dinklage), they form a team to play the game of combating aliens. 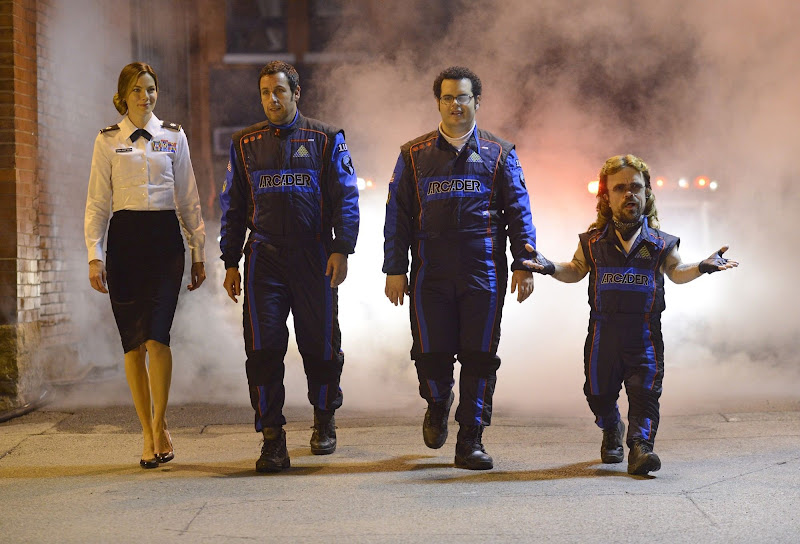 This preposterous film is directed by Chris Columbus who shows no interest in exhibiting any intelligence in these characters, but he is eager to deliver juvenile jokes that are seldom funny. Not a single character in the film is remotely believable or likable, and they appear ranging from being stupid to retarded. If I were an alien, I would have no regret destroying any of them.

Even with more than $110 million in its budget, the film's visual is pathetic and shows no creativity or imagination. The film's posters have shown that cities like San Francisco, Sydney, Paris, and Tokyo are destroyed by Pac-Man. But that's just a cheap trick to market the film, as if money has been spent on false and misleading movie posters than the actual movie. In the film, Pac-Man only shows up in Guam, Washington DC, Hyde Park in London, and New York City. It never gets a chance to go anywhere else as the film posters imply.

If the $110 million were spent on actual searching for aliens instead of this movie, that would be a good excuse for aliens to spare the extinction of humanity. It looks like Stephen Hawking is getting more pressure in communicating with aliens since Hollywood is no good at it.