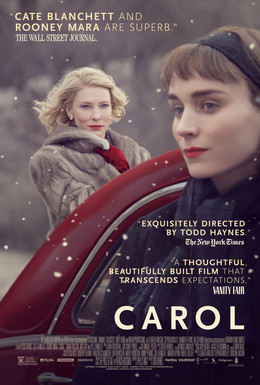 Nowadays, it is no longer a big deal to have a same-sex relationship in the United States. But back in the '50s, it was a taboo that can be devastating to everybody involved. That atmosphere made Patricia Highsmith's 1952 novel "The Price of Salt" about two lesbians' romance both remarkable and significant. Adapting the novel into an absorbing film "Carol" (USA 2015 | 118 min.), the director Todd Haynes beautifully tells their love story featuring the best female performances this year by two wonderful actresses Cate Blanchett and Rooney Mara. The film is leading the Golden Globes nominations including both of them in the best actress category, and I have no doubt that they will go on to take home the Oscars for best actress and best supporting actress next February.

Therese Belivet (Rooney Mara) is an aspiring young photographer who works at a department store in Manhattan. When an impeccably dressed customer Carol Aird (Cate Blanchett) catches her eyes as if somebody has just walked off a glamorous Hollywood poster, she falls in love at first sight. That attraction is also mutual. Carol orders an expensive train set without taking her eyes off Therese during the whole time. Upon her leaving, Carol conveniently leaves her gloves at the counter for Therese to have a reason to contact her again. That old trick never fails.

Partially due to her past affair with a childhood friend Abby (Sarah Paulson), Carol is in the middle of a divorce with her husband Harge (Kyle Chandler). Therese is dating Richard (Jake Lacy) who sincerely wants to marry her. But once Carol and Therese connect, they go down a path that is not only scandalous to the society, but also an unknown adventure to themselves. The subtle emotional progress between the two women is deliciously unfolded when they take a road trip together to Chicago. 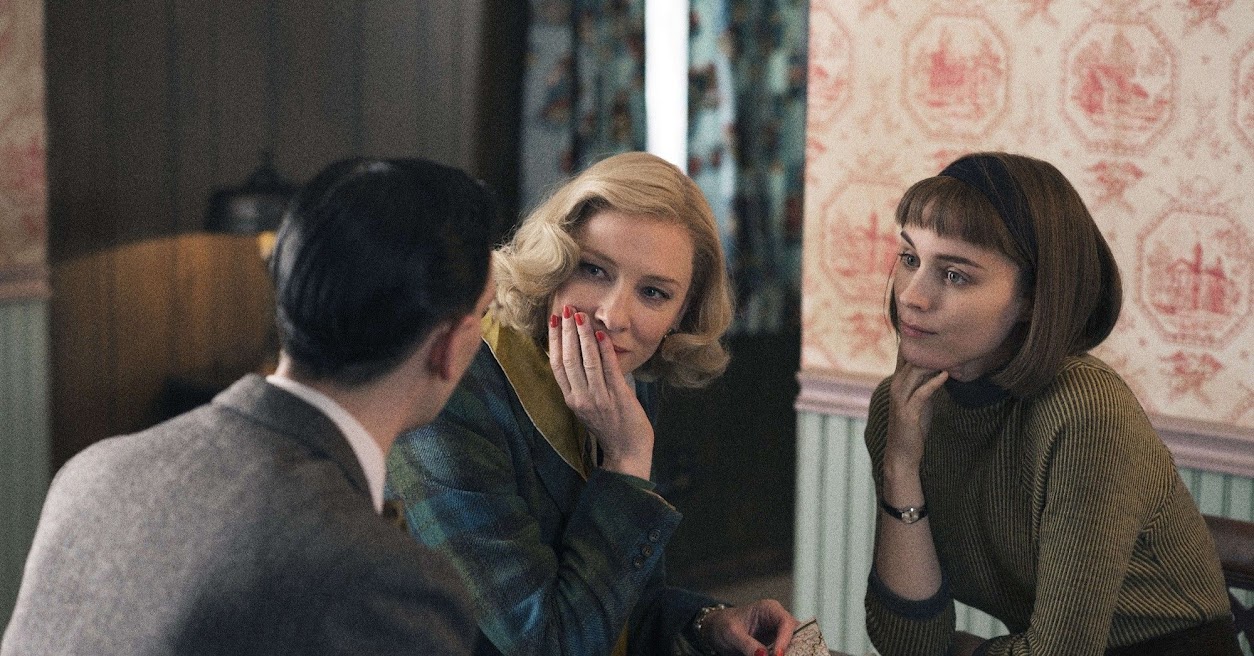 Shot with super 16 mm, the director Todd Haynes masterfully takes us back to the period in the '50s with grainy images, warm saturated colors, detailed costumes, and non-stop burning cigarettes. But what he achieves even more impressively is how he terrifically takes us into these characters' minds little by little. Metaphorically, we often see Carol and Therese through a car window or some other obstructive objects, as if their secrets are no longer invisible, yet they are not completely exposed.

Carol and Therese carefully navigate their love and desire in an intolerant society. Sometimes they surrender to their true feelings, but at other times they yield to the reality. Both Cate Blanchett and Rooney Mara expressively and delicately capture their characters' complex inner worlds. Their screen presence is nothing short of breathtaking. The look in their eyes often can speak volumes without a single word.

Times may have changed, but the love story between Carol and Therese and the performance by two exceptional actresses endure.